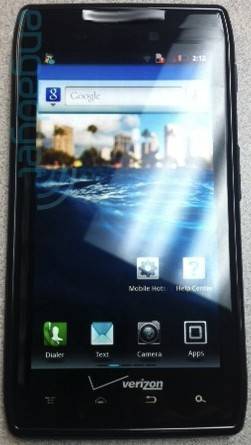 A few of the devices we are all expecting to see at the upcoming Motorola event next week seem to be out in the wild hanging out and soaking up the sun. The Motorola DROID RAZR (codenamed Spyder) is the new device many are really excited about from both Motorola and Verizon, and we also have some eyes on with the new Motorola Xoom 2.

Originally the Spyder was leaked as the DROID HD but now we know it in fact will have a 960 x 40 qHD display and not a HD level 1280x720p panel like originally thought. It will however be the first qHD AMOLED display so that is very exciting and I can’t wait to see more. Motorola has been busy buying up RAZR domains and most likely this will hit the market as the Motorola DROID RAZR, but that is yet to be confirmed. The RAZR is looking pretty with that carbon fiber textured rear and glossy finish, don’t you think? It will be rocking a powerful dual-core processor and Verizon 4G LTE but we already known all of that and more details are provided at the links above.

Next up is the Xoom 2, looking near completion the Xoom 2 is all wrapped up and has the Motorola and Verizon branding in place and seems to be enjoying some Android 3.2 Honeycomb. This is said to be the 8.2″ model. I’m still hopefully a new Xoom will get released next month running Ice Cream Sandwich but we wont know until Google announces it. Showing that nice two-tone white and black finish with curved edges Motorola went with a unique design and I’m liking it thus far.

We still don’t have any further details although its said the RAZR is running at 1.5 GHz on that TI dual-core processor but should still ship at 1.2 GHz like original leaks suggested. Hopefully we see more leaks shortly, otherwise stay tuned right here at Android Community for the Motorola event come October 18th.