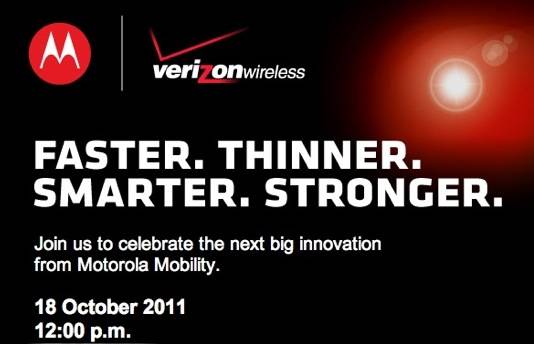 We’ve just learned of an upcoming event featuring the smiling faces of both Motorola Mobility and Verizon, set for next Tuesday, October 18th in New York City. Details are scarce, but given the large number of recent leaks, there are a few very specific possibilities for new devices. The tagline “Faster. Thinner. Smarter. Stronger.” is a big clue – rumors that Daft Punk will be on the scene are completely speculative at this point.

So, what’s on deck for Motorola? It could be any number of devices. A big event like this is likely to feature the biggest and brightest in Motorola’s upcoming lineup, and for tablets that means just one thing: new XOOMs. The XOOM 2 and XOOM Media Edition have had extensive leaks already and are strong possibilities for an unveiling, and the kid-friendly XOOM Family Edition could be on hand for a chaser.

As for phones, with all the recent rumors and leaks there’s really no telling. The DROID RAZR is a strong contender considering the “Thinner” text, especially since Motorola hasn’t seriously pushed that particular branding angle in a while. Equally possible is the Atrix 2 (final Verizon name is up in the air), sequel to the AT&T original with a BIONIC-style laptop dock and a beefed-up display pumping out 960 x 540 pixels. And any one of the concept devices revealed back in June might finally be coming to market.

All bets are off  until next Tuesday. Android Community will be bringing you all the news as it happens.