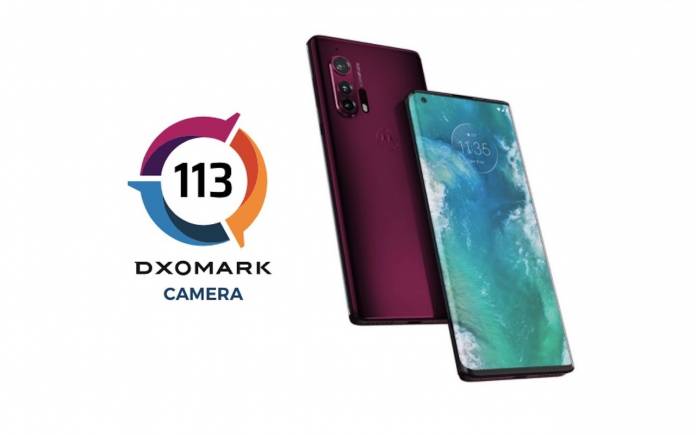 It’s about time a new Motorola phone hits DxOMark. Not that DxOMark is the ultimate source for camera reviews but the Motorola Edge+ has just been analyzed by the site. The phone has scored an average of 113 (119 Photo, 101 Video). The public is shown a few photo samples that tell us the device boasts a decent camera performance. It’s number 11 on the list, tied with the Honor 20 Pro and the Samsung Galaxy S10+. We don’t have a comprehensive review of the phone yet but maybe this review will give you an idea if it’s worth your money.

The flagship phone was unveiled together with the Motorola Edge budget version back in April. A Motorola Edge+ Teardown has revealed plenty of copper and glue. The phone is getting two major Android upgrades instead of one so it’s good news.

The Motorola Edge and Motorola Edge+ have been leaked several times before their official launch. The flagship phone was noted to have powerful camera features and it did arrive with promising specs and features. To review, it comes equipped with a triple rear camera system headlined by a 108MP sensor with f/1.8 aperture, PDAF, and OIS + 8MP telephoto + 16MP ultra-wide shooter.

The phone features laser focus assist and Dual-LED flash. The cameras are capable of 6K video recording at 30fps, 4K 30fps, and 1080p in both 30 and 60fps.

The Motorola Edge+ offers a number of advantages. The detail in every image is very high while noise is well-controlled. Expect accurate exposure and white balance that is also consistent. The phone delivers dedicated wide camera captures in high detail.

Video exposure is also accurate and with high detail in most conditions. Like in images, noise is controlled well. Tracking autofocus is even effective. Unfortunately, you may see some green cast on outdoor videos plus clipped shadows. There may be ineffective stabilization while walking. Sometimes visible are ringing and color quantization

Some still images may show soft detail at medium zoom. Long zoom range may result to lost details. You may also see some soft corners and edges, vignetting, and ringing artifacts, as well as, undersaturated skies and warm tones indoors.

The dynamic range is not as wide. Portraits may show unnatural indoor colors, softness in subject, and some depth estimation artifacts. There’s some luminance noise visible and slight underexposure, especially at night.