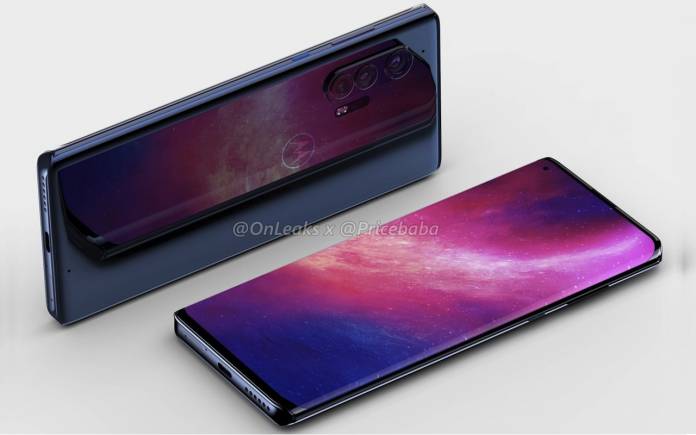 In February, we mentioned that the Motorola Edge+ could be the next flagship smartphone from the brand. Images were rendered before the official launch and now we’ve got more information. The details are mainly on the camera specs. The Motorola MOTO EDGE+ is said to arrive with a 25MP selfie camera under a punch-hole display. A triple rear camera system can also be expected, comprising of a 180MP main shooter plus 16MP and another 8MP camera. The information was shared on Twitter by a source.

TechDroider (@techdroider) has been a constant source of upcoming phones. He was our same source for the Moto E3 from years ago. Just yesterday, he shared live images of the Google Pixel 4a.

Nothing has been confirmed yet but the Motorola EDGE+ is said to be the Lenovo-owned brand’s next flagship offering. That is a possibility but we’ll have to wait for the official launch.

The Motorola Edge+ has been rendered recently by Onleaks and Pricebaba. It may come with a curved waterfall screen measuring 6.5- to 6.8-inches with 90Hz display and 2340 x 1080 pixel resolution. Other features we can expect include an on-screen fingerprint reader, dual-LED flash, two noise-canceling mics, 3.5mm audio, SIM card tray, speaker grill, and USB Type-C port.

The Motorola Edge+ specs could also include Snapdragon 865 processor by Qualcomm. This means 5G connectivity may be on the horizon, making it the first-ever 5G phone from Motorola. A 5000mAh battery and max OF 12GB RAM have been mentioned as well so let’s wait and see.