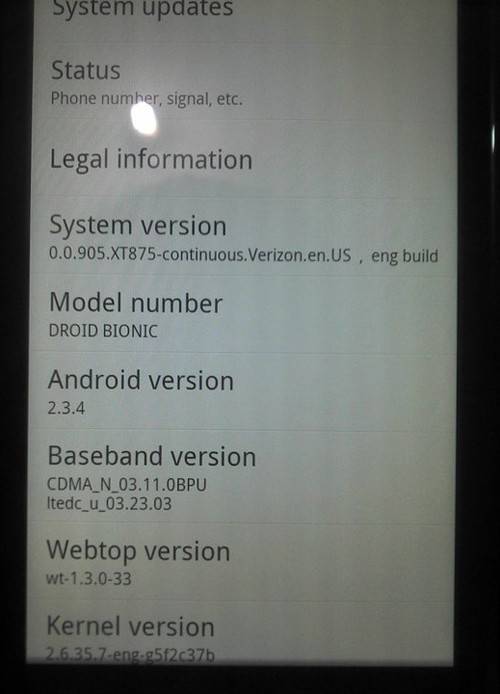 Our best late-night tipper buddy Joseph has done some sweet internets digging to bring us a few bonus specs on the upcoming dual-core LTE Android by the name of Droid Bionic. We’ve been waiting for this device since CES those billions of months ago, back when it was an entirely different person – now who is it? Some stranger to us! No worries though, we’re still in love. Let’s talk about the newest information, straight outta China.

The following specs come from a specs-heavy Chinese website by the name of PConline.com.cn and appear very much to be at least mostly legit (if you ask us, that is.) What they’re saying here is the following, all of it appearing to point toward the “new” form factor for the device and running right alongside rumors of specs we’ve seen coming out of other holes in the wall these past few weeks:

AND there’s a photo of the system information screen which oddly enough is black on white and shows the system version to be the following: eng build, 0.0.905.XT875-continuous.Verizon.en.US

If you’ll take a look at that particular processor you’ll see that we’ve indeed come across it in a few other devices before: we saw it inside the carrierless LG Optimus 3D [REVIEW HERE] and THOUGHT we saw inside a version of the Samsung Galaxy S II at one point, and of course you know that the Droid 3 has that same processor as well.

There are a few photos included on the page, those being mostly the same as we saw back on June 6th, 2011 – if you’d like to see a few MORE photos, head back to the Form Factor v2 post.

Finally, you’ll notice a bit of difference in the screen size from what we’ve experience before. Heading back to this benchmark post you’ll see that we were dealing with a 960 x 540 pixel resolution display, now we’re at 640 x 960 pixels. Seem a bit weird to you that only one side jumped in size? Me too.

Point of interest: earlier today we experienced a Motorola Droid 3 System Dump that contained, as per usual, wallpapers included with the device in question. One of these wallpapers is titled “Bionic” and can be seen below and ON what we believe is the Bionic in the gallery above. Fun stuff!