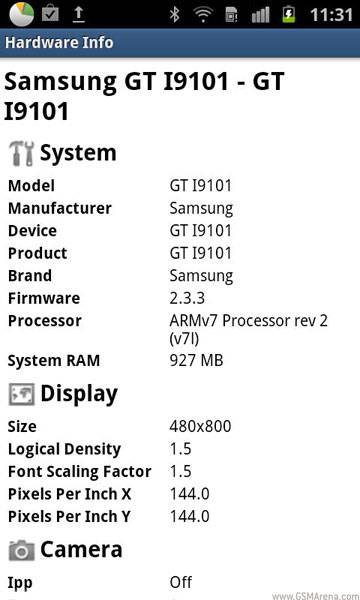 On Monday a couple pics of a new Samsung Galaxy S II smartphone surfaced. The smartphone has the model number I9101 and we reckoned that the device was the NFC packing version of the SII that we have been expecting for a while. Today some new details of that smartphone have surfaced and the screen shots show that the S9101 has new hardware inside.

The images apparently came from the Samsung Singapore Facebook page and the specs may not be the final version offered. The screens show that the smartphone has a TI OMAP4430 chipset with a 1GHz dual-core ARM Cortex-A9 CPU. The smartphone also has PowerVR SGX 540 GPU and 1GB of RAM. The RAM is the same amount as the SII I9100.

This means that the hardware in the I9101 is not as good as what is in the existing handset. What gives? Could this be a cheaper handset for emerging markets or something? The camera is expected to be a 5MP unit and the screen may be a Super Clear LCD rather than the Super AMOLED Plus on the other SII smartphone.