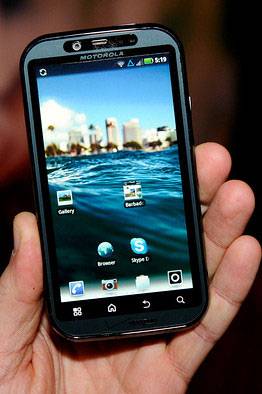 What does this appear to be to you? Some sort of DROID or something? How about the long anticipated dual-core 4G LTE Verizon phone made by Motorola and called the DROID Bionic? That’s what they’re saying over at Mobile Gearz, a site that appears to have gotten the images from a random dude from Facebook. Those random dudes, I’m tellin ya, they have the neatest stuff. Now for this phone, notice a few things in the gallery below: the flatness of the back of the device, the extreme similarities between this and recent LG devices with the same lip, and the code name near the bottom of the device in the full shot: 04GT-9000. Also take note of the laptop dock – ATRIX 4G functionality ahoy!

Although these images aren’t sourced properly at the place we found them, upon closer inspection we find that they’re marked moto.it168.com, a site of some note when it comes to leaks that end up being quite legit. These images give the phone what appears to be basically an entirely new form factor if compared to the Bionic we’ve come to know and love (then cry over and run and hide over.) Of course, we DID know that it’d be coming back with a new form factor all the way back before Spring.

So what can we take from these images? That this device will have some sort of webtop mode so it’ll work with that laptop dock, that it’s got a front-facing camera as well as an 8-megapixel camera on the back, and that it really really looks like recent DROIDs. Have a look at this shot to see what it looked like before:

and here to see what it looks like now, apparently: