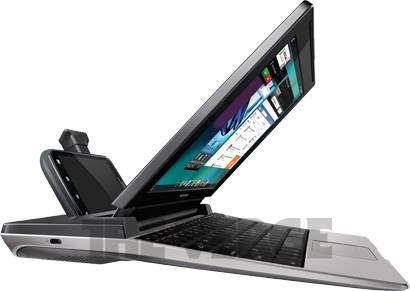 We’ve seen plenty of the Motorola Atrix 2 this week especially the hands-on yesterday, but today even more details as well as the full press images have leaked to the interwebs. This isn’t the first time we’ve seen the Atrix 2, but we now know that will be the official name — not the Atrix HD.

The successor to the original Atrix was also spotted way back in August and was being rumored to have both an HD 720p display, and AT&T 4G LTE but these newest leaks and details have confirmed the specs. Headed soon to AT&T all of the signs are pointing to no 4G LTE. It will use 4G HSPA+ but not the new 4G LTE network that was just rolled out. This is a big mistake if you ask me, but we’ll see as the launch gets closer. Codenamed the “Edison” the specs are officially confirmed as a 4.3″ qHD 960 x 540 resolution Display, dual-core processor, 1GB of RAM, 8GB of internal storage (2GB micro-SD included). Featuring an 8MP camera on the rear (no hump like the Bionic) 2MP front facing video chat camera. Powered by Android 2.3 Gingerbread and the same Moto Blur UI we’ve seen plenty of lately.

Also leaked was some pictures of the Atrix 2’s new Motorola Lapdock. From the initial picture it seems to be huge but we could be wrong. Looking much fatter than the Bionic Lapdock seen here. No specific details or specs were given at this time but it’s said to be 10.1″ which is smaller than the previous version, so it should be lighter and a bit more portable. There also seems to be a cable attaching to the phone for the connection rather than docking the smartphone, hopefully Motorola will streamline the design and the same dock will work with all phones in the future unlike the previous models.

This is just hitting the wires so we’ll continue to look for more information regarding both the Atrix 2 and the Lapdock.