The Motorola Moto G5 is finally out and as expected, here’s a durability test as conducted by who else– Zack Nelson aka JerryRigEverything. We knew it’s about to happen anytime soon. You know Zack, he’s always ahead of us in breaking and exhausting the best and the latest smartphones in the market today. After the HTC U Ultra and that Nokia 6 Teardown, here’s another video featuring the Moto G5 which was announced at the Mobile World Congress and just entered the mobile scene last week.

The Moto G5 may be in the less expensive category but as we all know, the price isn’t exactly the correct indicator for durability. This device is light and we first thought it would easily break. Inside the phone, you will notice the removable battery. It’s something unexpected for phones being released recently so this is good news.

Moh’s Hardness Level test gives us an idea how scratch-resistant a mobile screen is. Most phones scratch at level 6 especially when tempered glass is used. Some phones have sapphire, plastic, or a hybrid glass, each one having different levels of hardness.

The Moto G5’s screen also scratches at Level 6. That’s good enough for a mid-range device. The fingerprint scanner is covered by a thin rubber coating as revealed by scratching. The scanner is a touchpad and not a button according to Zack. It seems enough but wear and tear may remove those scratches. The fingerprint reader still works though and functions normal after some period of scratching.

The 5MP front-facing cam is covered by a tempered glass so a razorblade won’t scratch the small screen. There is a small piece of vinyl covering the ear piece slot/speaker. It doesn’t pull with tweezers so there is a possibility it will hold itself well.

The Motorola Moto G5 is described as the first Moto G smartphone with metal built-in. However, most parts are still plastic as demonstrated by Zack’s razorblade. The bottom section of the back panel is plastic, as well as, the micro USB slot and headphone jack areas. Also made of plastic are the power and volume buttons .The center back panel of the smartphone is metal. 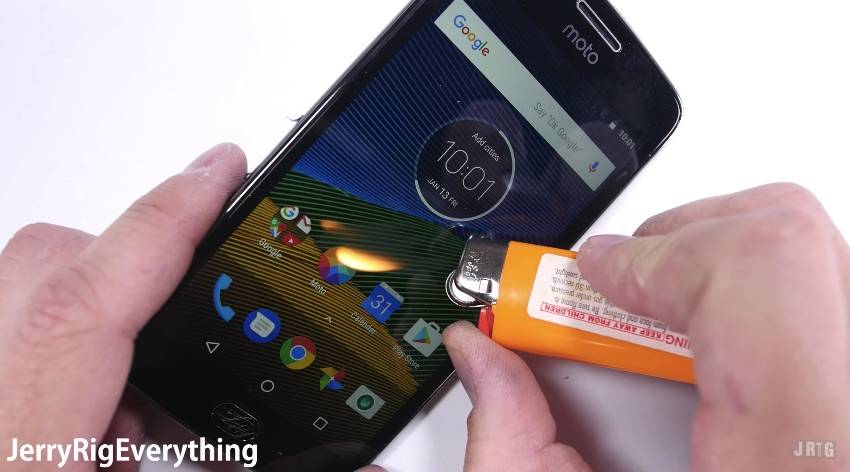 The screen is LCD because it turned black after 15 seconds under direct heat from the lighter. The screen soon recovered unlike in AMOLED screens where they would turn white and not recover easily.

As for the structural integrity of the phone, pressing from the back you can see the screen protrudes. It’s very obvious out of the removable piece. What’s good is that it doesn’t break nor shatter—just bent and the device still functions. Pushing the screen doesn’t flex much. Screen doesn’t function but rebooting gives it life again.

The Moto G5 has passed JerryRigEverythings’ Durability Test. This means it can be worth your hard-earned money. Make sure you have an extra removale battery with you for it to regularly work.