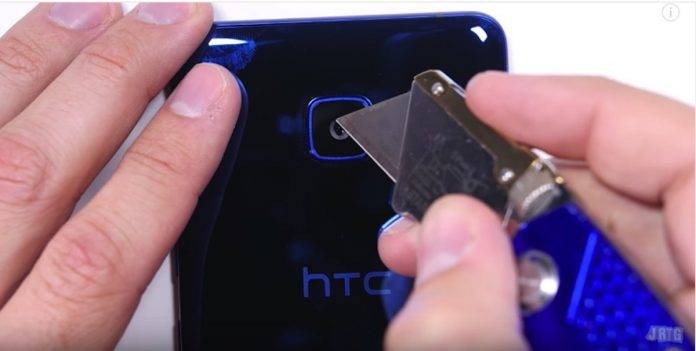 We’re starting the week with a torture test of the new HTC U Ultra. We trust Zack Nelson for reliable and true durability tests as he’s been doing such for years. We can’t emphasize enough how his stress tests have helped the consumers make informed decisions although some are not convinced like what happened when he released the Nexus 6P durability test video. Well, JerryRigEverything’s tests aren’t exactly the most accurate or scientific out there but we know the tests are practical.

Next to undergo such series of tests is the HTC Ultra. Zack asks again, “Is it durable?”. It’s one important question because he said that the HTC 10 was his choice for the most well-built phone for 2016. He’s very much curious if the new HTC Ultra will live up to its performance.

SCRATCH TEST. The HTC U Ultra with Gorilla Glass 5 scratched at level 6 of Mohs hardness scale. That’s normal but we want to know how the Sapphire glass variant will fare. We’re guessing it will scratch at about level 8 or 9. We’ll look forward to another scratch test once the new model is available in the United States.

As for the fingerprint scanner, it is covered in a special rubberish plastic layer that so it doesn’t scratch easily under normal use. Using a razor blade, some mark was left but it still is functional as the damage is very minimal.

The 16MP selfie camera is covered by glass so there’s no scratch. Finally, HTC ditched the plastic glass on camere lenses so this one should be better. The earpiece appears to be fabric but interestingly, it doesn’t come out easily. The back of the HTC U Ultra is said to be a fingerprint magnet. If you’re not going to use a phone case, make sure you clean it often.

The HTC U Ultra is made from glass so the razor blade doesn’t leave any mark on the back panel except if you push the Mohs precision tool to its limit as you’d see in the video.

The rear camera is scratch-proof as well. The camera bump is noticeable and is made of metal while the flash is only plastic. Zack recommends that you don’t scratch the plastic portion at the back.

In case you’ve forgotten, this phone doesn’t have any headphone jack. That fact won’t sit well in potential buyers so don’t forget this bit. Phone is metal all the way down to base. It’s definitely premium all the way around including the power and volume buttons.

BURN TEST. It took the 5.7-inch 1440p IPS LCD only ten seconds to turn a different color under the lighter. It quickly recovers so heat shouldn’t be a problem.

BEND TEST. As for the phone’s “bendability”, it is unlike the HTC 10 because the glass rests on the frame. Phone bends but it is still functional.  Unfortunately, there’s not much structural integrity, no thanks to the glass screen.

The HTC U Ultra is one good-looking device but it’s not the “Most Durable” out there.