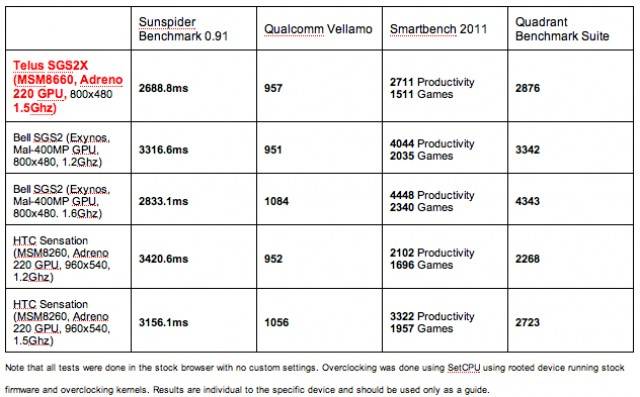 The crazy Canucks at MobileSyrup have gotten their sticky mitts on a Telus-branded version of the Samsung Galaxy S II X, with a super-sized 4.5-inch Super AMOLED Plus display. They’ve put it through the regular paces and not found the phone wanting, particularly praising its build quality, which surprisingly exceeds the vanilla Galaxy S II.

If you’re reading this post, odds are you want to know about that massive screen adorning the front of the Galaxy S II X. Good news: It’s everything you expect from the awesome Super AMOLED Plus technology, just a little bit bigger. Though the Galaxy S II X features the same 480 x 800 screen as other recent Samsung models, the reviewer notes that black levels are perfect, brightness is excellent, with no visible pixelating or distorting.

It’s a solid phone, scoring extra points for its high-quality feel and grippy battery cover. The extra room means there’s plenty of internal space for a big battery, which lasts longer than average – until you start using the incredibly speedy HSPA+ connection to the fullest. The camera and video are better than just about any Android phone out there, and even beat out some of the point-and-shoot cameras on the market. A lack of bloatware is much appreciated. 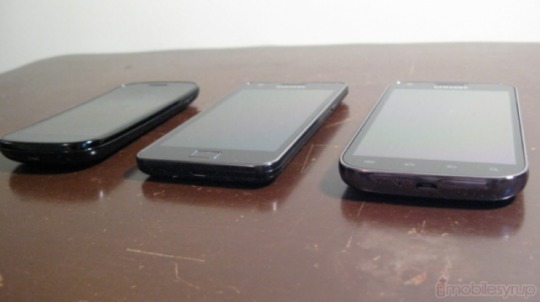 Disappointingly, the Galaxy S II X actually scores lower than its slightly older brothers. The larger phone scores considerably less on the GPU-intensive Sunspider and Qualcomm Vellamo tests, despite its speedy 1.5GHz processor. This isn’t a deal-breaker, since modern “superphones” can handle just about anything a typical user can throw at them, but speed demons had best look elsewhere.The phone tends to idle at a surpringly high RAM load. 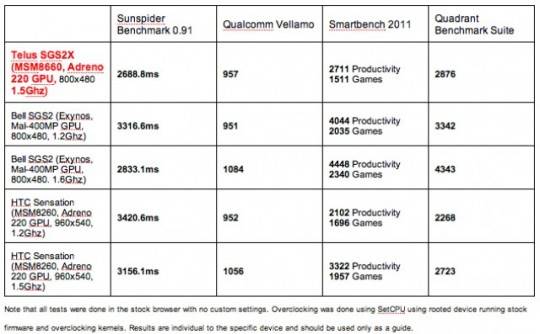 Overall the Galaxy S II X shares a lot in common with the world-conquering Galaxy S II, there’s just more of it to love. If you’re looking for a big, solid phone with a great display and fast data speeds (in Canada), you couldn’t ask for anything better. If, however, you need to have the fastest phone on the market or the phone with the highest pixel density, you may want to wait for the forthcoming Samsung Galaxy S II HD.

Be sure to check out MobileSyrup’s massive 20-minute video review if you want all the details. T-Mobile customers, take note – this one’s headed your way soon. Impulse buys should remember that the even more gigantic Samsung Galaxy Note may be in the pipeline.