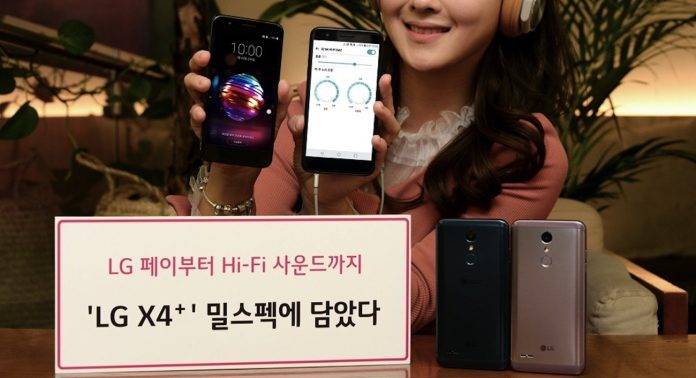 We’re not sure if the LG G7 will be ready in time for the Mobile World Congress this February. There might be a delay so we’d probably see the new premium flagship phone in March or April as the South Korean tech company is changing its business strategy. LG may also be doing some rebranding on the G series but before we see the G7, here’s a new mid-range Android phone that launched in South Korea.

The LG X4+ is another affordable phone that will be sold for about $280 in its home country. LG already announced that it will be available to purchase from the three major networks. There’s nothing much to expect from this phone but if you’re looking for a new mid-range Android gadget, get this LG X4+ that comes equipped with a 5.3-inch IPS display, 720p HD resolution, Qualcomm Snapdragon 425 chipset, 2GB RAM, 32GB onboard storage, 13MP rear camera, 5MP front-facing camera, and a 3000 mAh battery. There’s no dual camera setup but both cams are good enough to take decent photos, selfies, as well as, video calls.

The phone only runs Android 7.0 Nougat out of the box but it’s already capable of LG Pay–LG’s very own mobile payment feature. The device is mid-range alright but it can last for a long time with its durability courtesy of the MIL-STD 810G rating. This means the smartphone can withstand vibration, low or high temperature, impact, humidity, and thermal shock. The phone’s back panel is made of aluminum material so you know it’s really tough.

When it comes to audio quality, LG takes advantage of the Hi-Fi DAC technology. For mobile security and authentication, there’s also the standard fingerprint sensor placed on the back.