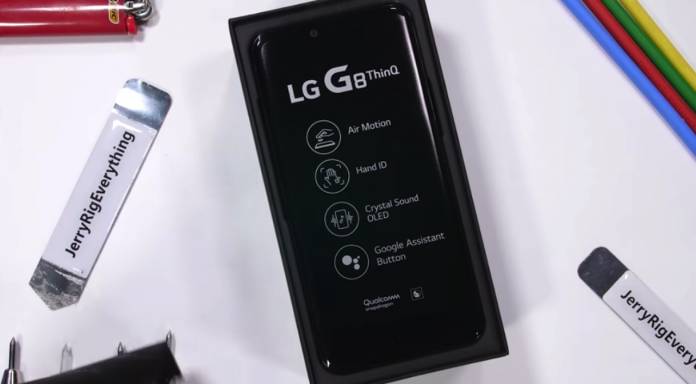 All durability tests tell us one thing–well, the strength of a smartphone. JerryRigEverything knows what he’s doing and the process he does the Scratch, Burn, and Bend Tests is always appreciated. The last flagship from LG reviewed by Zack Nelson was the LG G7. This time, the new LG G8 ThinQ undergoes a series of tests to see if it’s worth the premium price. The South Korean tech company’s latest flagship smartphone is durable, of course, but we’re more curious about some of the new features.

The phone scratches at level 6 with a deeper groove at level 7. That is normal for a display protected by Gorilla Glass 5. It means car keys and coins won’t scratch a smartphone if placed in your pocket. The screen won’t be damaged even if you scratch some parts of it. Scratching the sides and the glass back doesn’t do any damage.

Zack scratches the selfie camera area and nothing happens. Even the gesture controls still work well. Watch the video below:

That’s some neat Jedi trick. We’re imagining more possibilities with such a feature.

There is a rear fingerprint scanner that gets scratched but again, with no damage. Under the flame, the screen lasts 18 seconds before it turns white like most LED displays.

Bending the phone on both sides don’t do anything. There’s a little flex but the LG G8 ThinQ is still okay.

The LG G8 ThinQ survives, definitely. The smartphone has come a long way from being leaked to its official launch with a selfie camera equipped with ToF 3D technology.

The phone launched with a new Crystal Sound OLED technology during the Mobile World Congress 2019. We’ve got our hands-on feature and we noted it offers more ways to do the same thing.

The LG G8 ThinQ has already reached DxOMark with decent scores. The main camera system has advantages and disadvantages. It’s generally good but there are some noticeable losses and inconsistencies in the results.