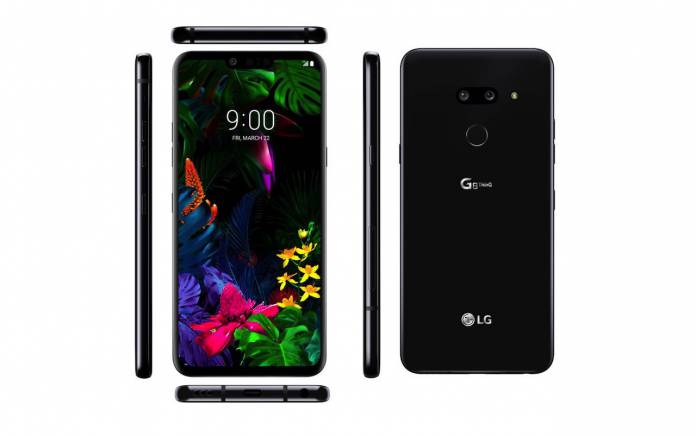 LG is showcasing a new smartphone at the upcoming Mobile World Congress. By next week, expect more information and images will be revealed. At this year’s MWC, LG is said to no longer challenge Samsung but Xiaomi. The G8 phone’s image renders and 360-degree video surfaced online before the Barcelona launch. The other South Korean is said to bid adieu to Touch function but the phone’s battery capacity will be larger than its predecessor. Officially, the next-gen smartphone from LG will be called the LG G8 ThinQ.

The LG G8 ThinQ selfie camera will arrive with ToF 3D technology. An image showing all sides of the phone was recently shared by Evan Blass (@evleaks) on Twitter.

The image is an “official photo” as per a previous report. We see it having a wide notch on the front display and dual rear camera system at the back.

LG isn’t implementing an under-display fingerprint sensor. There is still the presence of a round fingerprint scanner at the back as pictured.

The LG G8 ThinQ may not be enough to compete with the Samsung Galaxy S10 or Huawei P30 but LG is adding a 4K display. That is an impressive feature although, to be honest, we can’t really see the difference in resolution, especially in smaller mobile devices.

Let’s wait and see for what LG G8 ThinQ will introduce new and different this year.