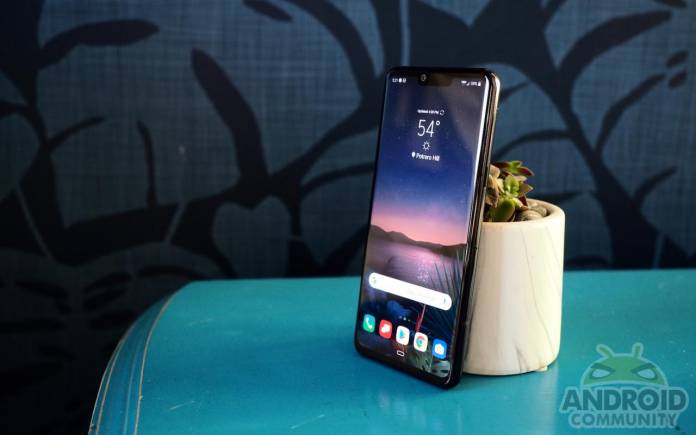 LG makes great smartphones that look great on paper, look great in person, and do great in action. It remains a mystery why its flagships still fail to capture the hearts and wallets of consumers but it’s definitely not for the lack of trying. In 2019, the manufacturer has decided to mix things up a bit, partly in preparation for what manufacturers and carriers perceive to be the next big thing in mobile. Most people, however, might give its 5G sibling a pass but the LG G8 ThinQ is nothing to ignore, especially with the plethora of features it offers.

The star of this year’s show is undoubtedly the Z Camera, what LG calls its 3D Time-of-Flight (ToF) camera that utilizes Infineon’s REAL3 technology. Because of how ToF sensors work, the camera can recognize 3D shapes with more accuracy and with less influence from external light. This, in turn, lets LG use the same sensor for both security and convenience features.

Android phones have been criticized for how easily their face recognition systems can be fooled, sometimes even by photos. Adding a 3D ToF sensor aims to fix that and LG claims that it couldn’t be fooled by flat images. By also tracking the user’s eyes, the LG G8 ThinQ will know when you’re looking at it and when you aren’t, and it won’t authenticate in the latter case. LG, however, wants to take it further by using palm vein recognition. Yes, this is the first phone with Hand ID, which uses infrared light to map out your palm’s unique vein patterns by measuring hemoglobin absorption. Simply put your hand in front of the sensor and unlock the phone. We’ll need a few more tests to see just how accurate, not to mention how secure, this new biometric security really is. 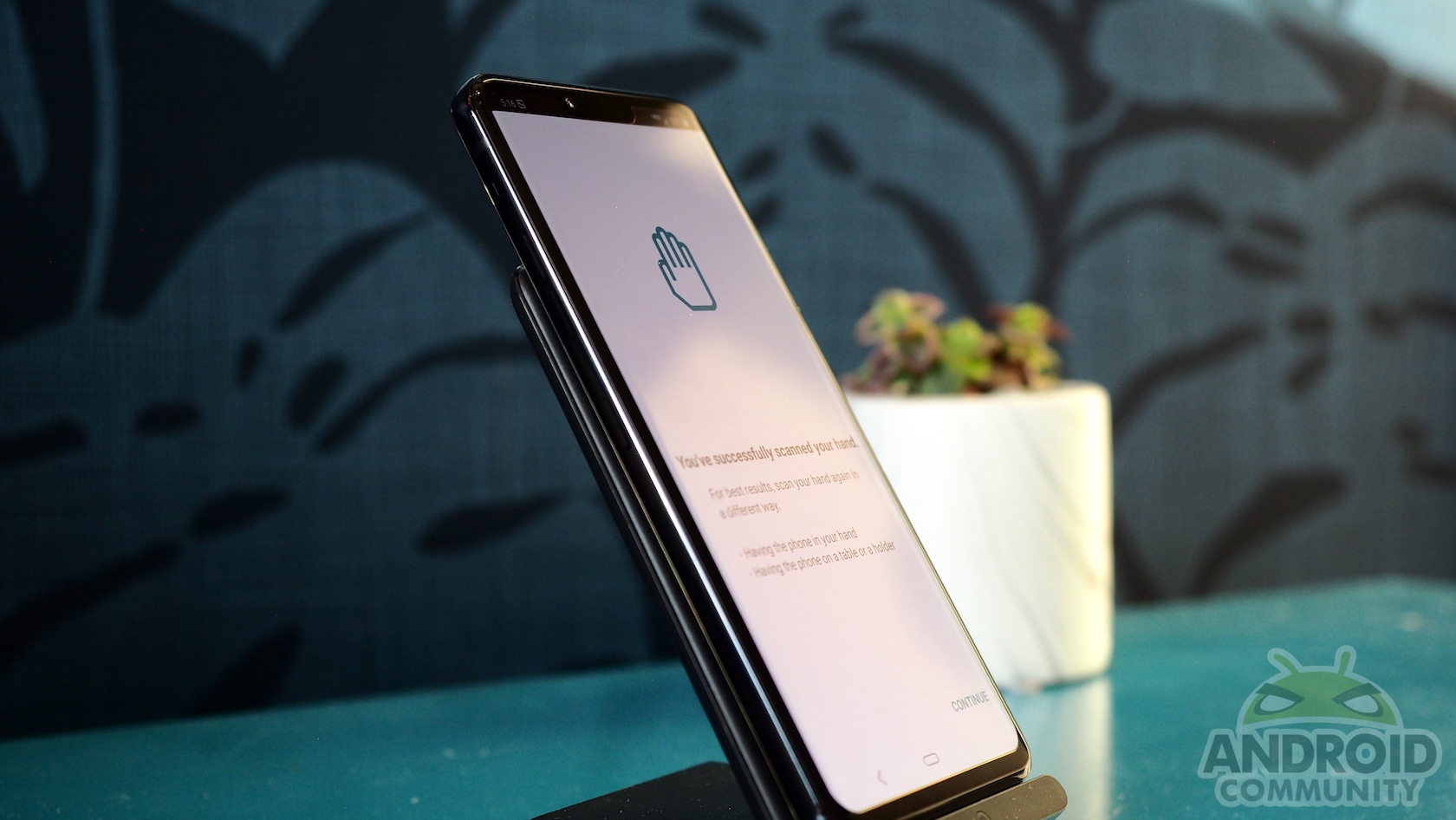 That isn’t the Z Camera’s only use, however. LG calls the second one “Air Motion” and if you’ve seen the company’s first teaser, you’ll know it’s all about Jedi hand tricks. Within a given distance, preferably 6 to 8 inches away from the screen, you can control the phone and certain apps without even touching the screen. Hold your hand in front of the screen for a while and wait for a bar to pop up. Swipe your finger left or right to choose between two preset apps or pinch to take a screenshot. Inside supported apps, it could be used to pause or play video, accept or reject calls, and more. In practice, placing your hand in the right place to be detected by the 3D ToF needs practice to develop muscle memory and the required distance from the screen almost makes touch-free gestures negligible. 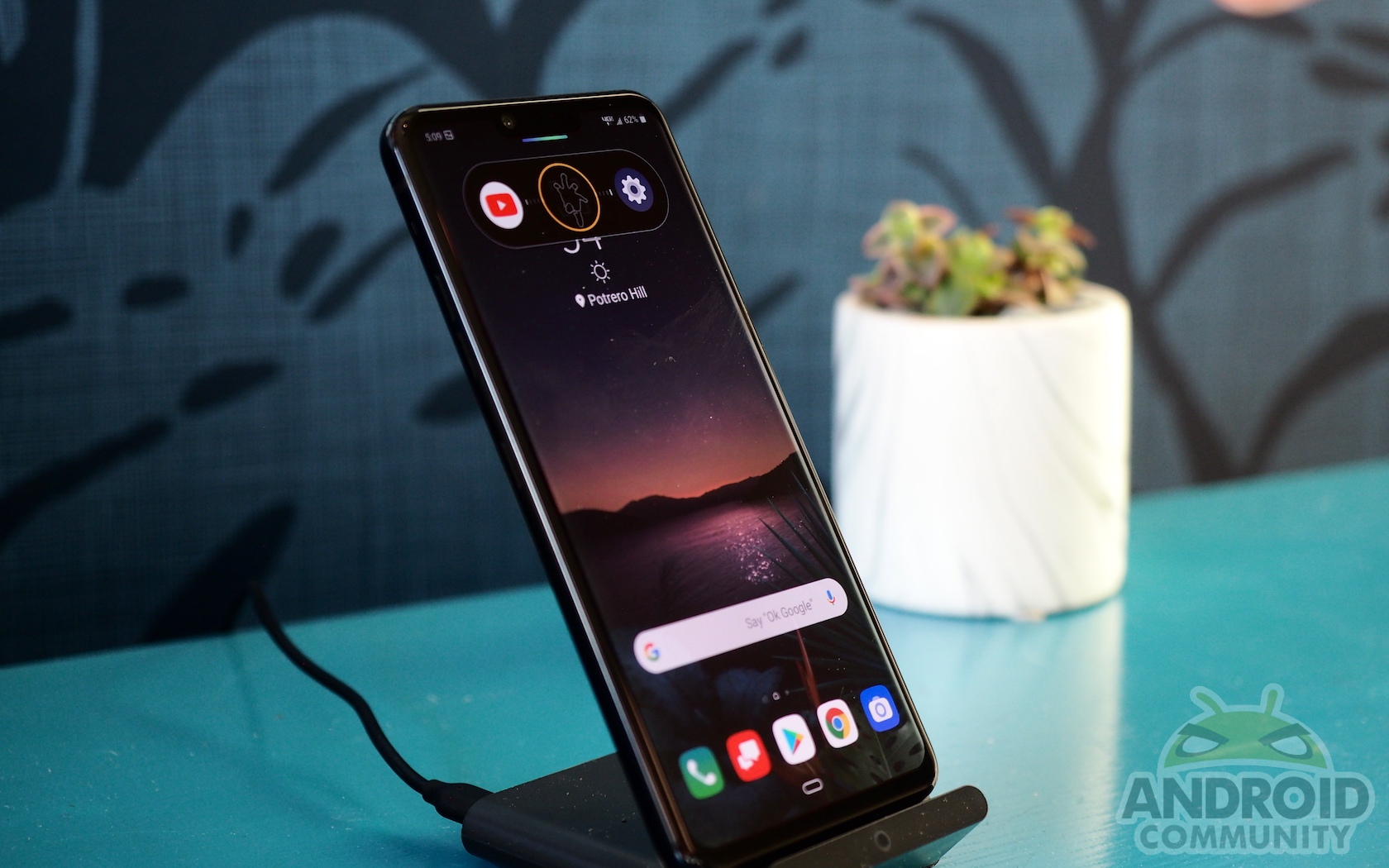 With an 8 megapixel front-facing camera, 3D ToF, and an IR emitter and receiver, LG had no choice but to give the sensors some room on the G8 ThinQ’s face. In this case, a wide notch. Despite that, however, LG didn’t put a speaker grille at the top. Instead, it uses the pre-announced Crystal Sound OLED, LG’s marketing term for its piezo-electric emitter behind the screen. This turns the screen into a speaker onto itself which has two advantages. When taking calls, it lets you heard clearly even in noisy environments by acting as a bone-conduction speaker. Turn the G8 ThinQ sideways, however, and it becomes a second speaker for a stereo effect. Together with the Boombox speaker that blasts towards the bottom, the G8 ThinQ is able to produce loud sounds and lots of bass, something you wouldn’t expect from a phone its size.

Flipping the G8 ThinQ over, you are met with two cameras. That number might sound almost old-fashioned by now, but LG has always been modest in hardware upgrades, preferring to focus, no pun intended, more on quality rather than number. You have a standard 12 megapixel f/1.5 camera paired with a 16 megapixel wide-angle f/1.9 camera and its special trick is called “Video Portrait”. Yep, LG is giving video recording its very own background blur, a.k.a. bokeh effect, that actually performs well in our brief test. The G8 ThinQ also has Night View that combines 10 images to reduce the expected noise along with the usual AI CAM scene recognition. 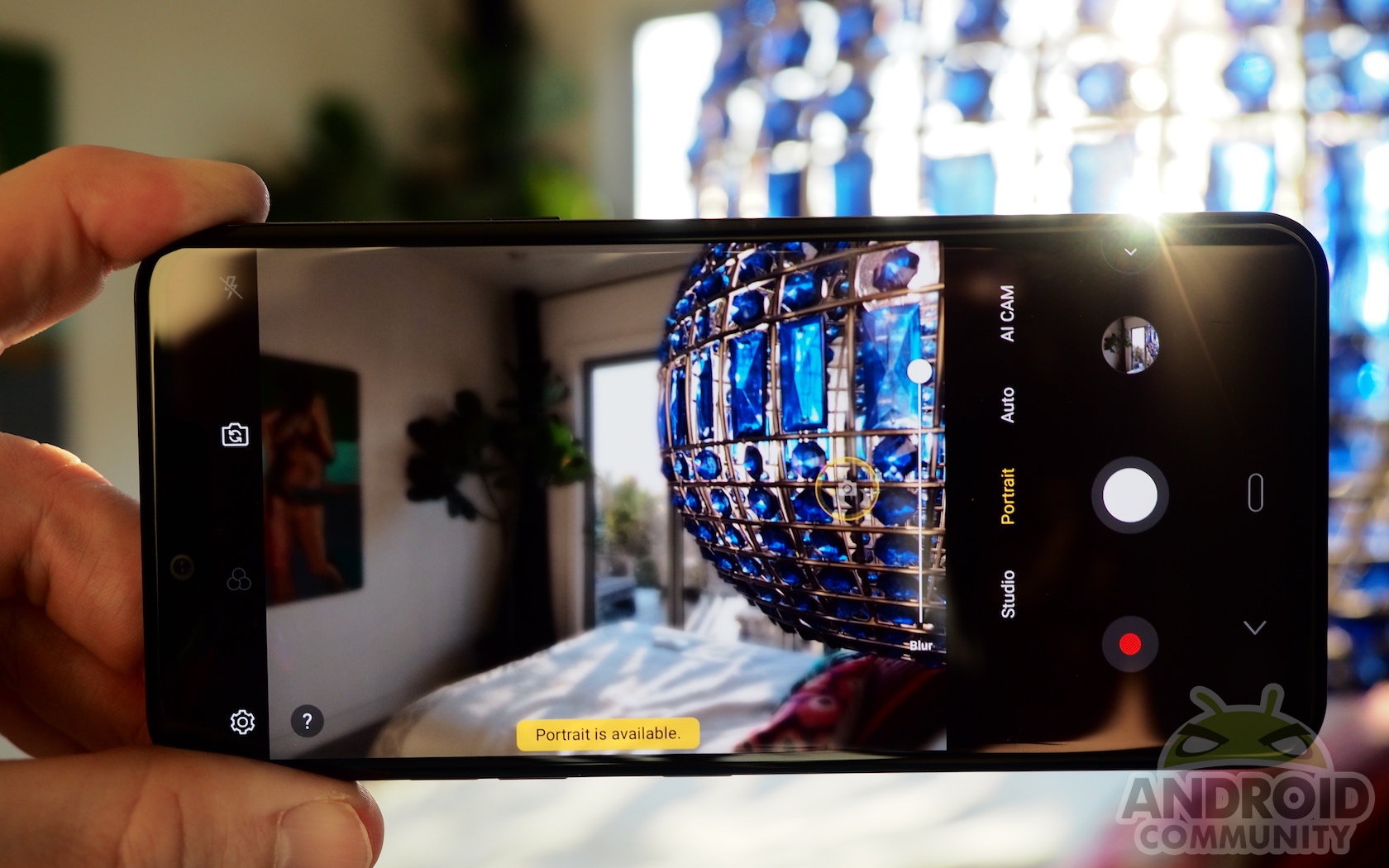 The LG G8 ThinQ carries all the specs you’d expect from this year’s premium flagships, like the Snapdragon 855, 6 GB of RAM and 128 GB of expandable storage. Of note is the first OLED panel on a G series phone, a 6.1-inch 19.5:9 QHD+ FullVision panel. Despite all the components, LG manages to squeeze in a 3,500 mAh battery and even a headphone jack. Availability details are still under wraps, but when the LG G8 ThinQ does arrive in the coming weeks, it will be available in Carmine Red, New Aurora Black, and New Platinum Gray color options. 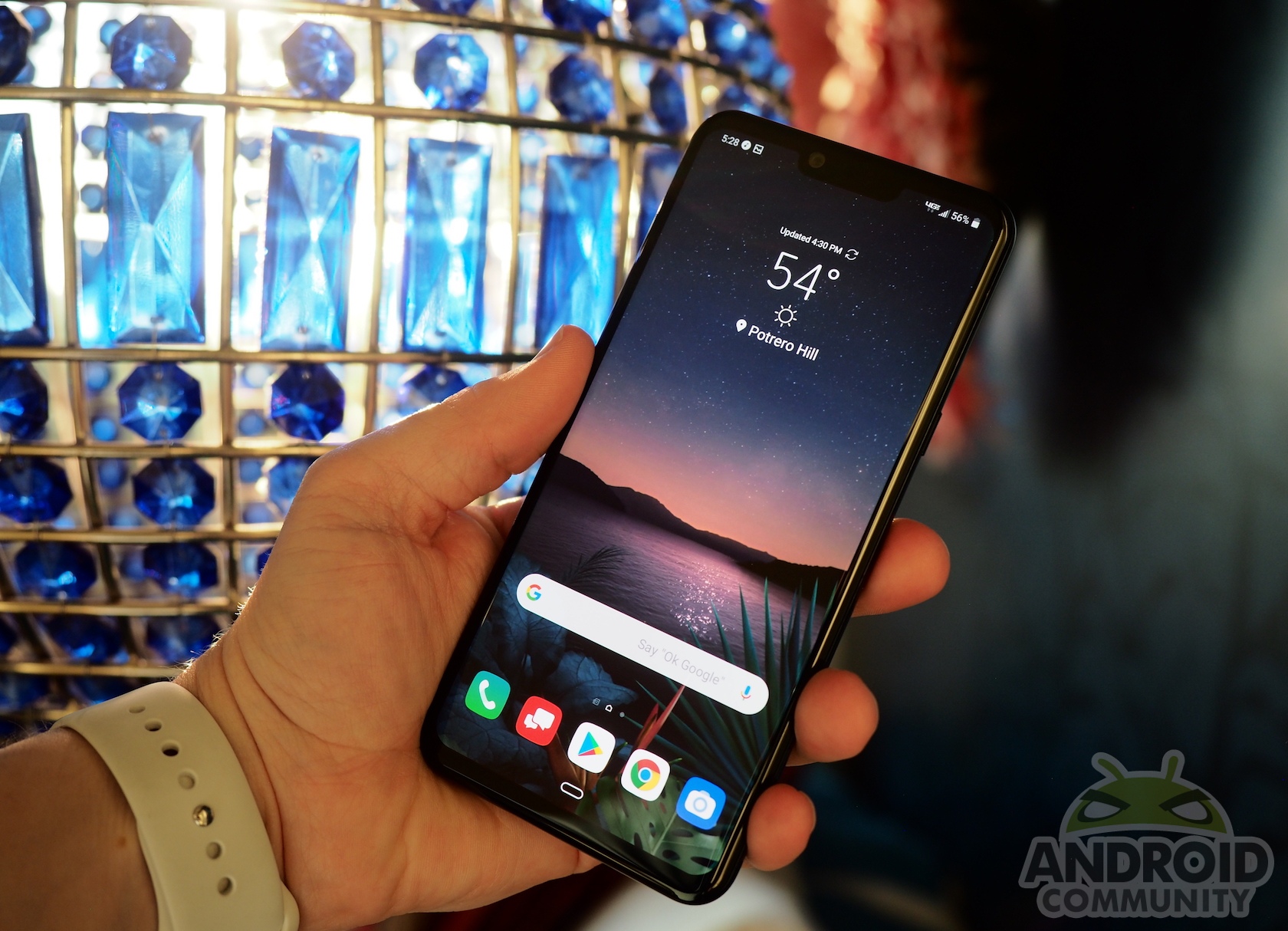