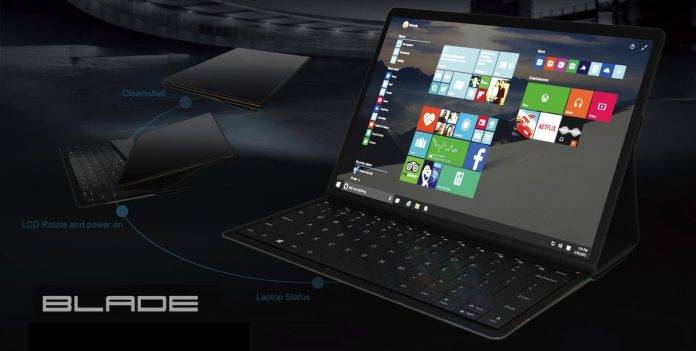 Lenovo is making enough money, thanks to its several sub-brands like Motorola and ZUK. In case you’ve been living under a rock, Motorola is now owned by Lenovo. The phones still have their own identities as Moto phones as the branding and design principle are still very much Motorola. As for ZUK, it’s the company’s entry into the mid-range category in China and select key markets.

When it comes to Lenovo, the last mobile devices from the brand we saw were tablets specifically the Lenovo Tab 4 family of tablets and the Yoga A12 convertible tablet, revealed last February. There’s also the Lenovo P2 and the Tango-powered Lenovo Phab 2. We’re not certain yet about this one but looks like a new hybrid 2-in-1 will be out soon.

The Lenovo Blade is believed to be a notebook-slash-tablet that you can use for mobile computing, web browsing, and social media networking. Lenovo could be improving the design by working on a new line instead of releasing another Yoga Book.

This Lenovo Blade is also described to be a multi-purpose tablet with Miracast wireless feature and a detachable keyboard. Lenovo got our attention with this one with its built-in kickstand but it isn’t exactly a rival of the Microsoft Surface. We’re looking at this as another Android tablet (or is it a Windows 10 tablet?) that can be converted into an instant notebook as made possible by a keyboard accessory.