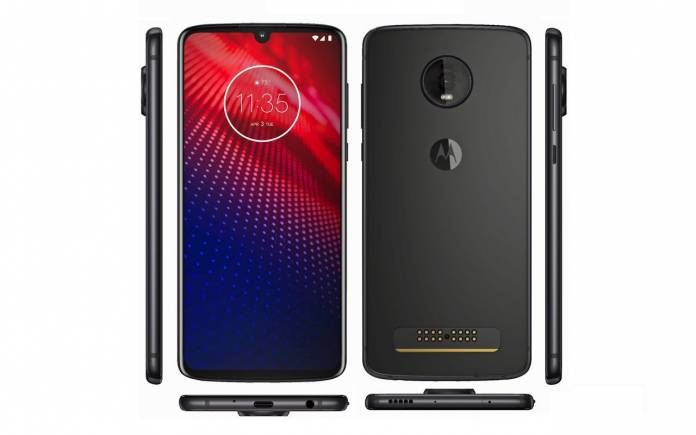 Motorola may not be on top of the game but it’s not going away. The brand stays as long as Lenovo allows it. We’ve recently seen the Moto E6 specs spilled ahead of launch. There’s the upcoming Motorola RAZR foldable phone and Moto P40 Play. Of course, the Moto Z4 and its variant Moto Z4 Play, are also coming soon. Rendered images and 360-degree video renders have already appeared online and we can expect more will be revealed until the official launch day.

As early as November last year, we noted the Moto Z4 may be equipped with Snapdragon 8150, 5G connectivity, and Moto Mod support. An early render presented really small bezels and a tiny notch like this new image posted by Master Leakster Evan Blass on Twitter.

The renders we’ve seen actually match. We see the notch and small bezels. The chin and forehead are still noticeable though. The camera bump is very obvious at the rear. The Motorola M logo is still situated at the back which could mean the rear fingerprint scanner. The 16-pin pogo connectors are also at the back.

The USB C port is placed on the bottom edge just beside the headphone jack. Some of the specs and features we know so far: edge-to-edge screen, 48MP rear camera, waterdrop notch with a selfie camera, 4GB of RAM, Qualcomm Snapdragon 8150 processor, 32GB built-in storage, Moto Mod support, and Android 9 Pie out of the box.

Moto Z4 turns into a 5G phone with the 5G Moto Mod similar to the Moto Z3. The Moto Z3 5G device is now available through Verizon. We can expect the Moto Z4 will also be ready from the same carrier.