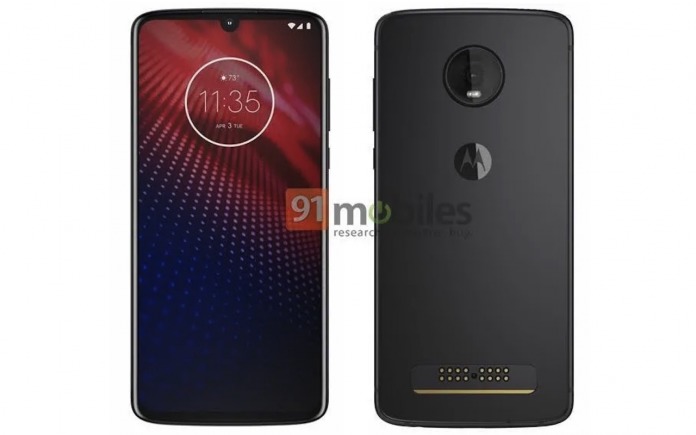 The Moto Z4 will follow the Moto Z3. We are almost certain of that as we have been seeing a number of renders and speculations. Mainly, they are for the Moto Z4 Play but it only means a Moto Z4 will be ready soon. Earlier in January, Moto Z4 Play images and a 360-degree video render surfaced online. A 48MP camera sensor is rumored to be part of the Moto Z4 Play phone but that is yet to be proven.

The follow-up to the Moto Z3 is expected to be better but with a fresher design. Not many people will notice the changes but the Moto Z4 rendered here shows an almost bezel-less display. The edge-to-edge screen still has a waterdrop notch so we know Motorola isn’t going the camera hole direction yet. The selfie camera is still placed inside the notch.

The bezels of the Moto Z4 are obviously thinner on all sides. Checking the rear side of the smartphone, only one camera is available. It could be enough given it will be a 48MP sensor although that is still considered a rumor.

Moto Mods are still expected to be compatible with the next-gen Moto Z phone. Remember how Motorola promised three generations of compatibility for Moto Mods? We can be thankful about this fact because it benefits the consumers. No need to buy new accessories every time.

The 16-pin pogo connector is found at the rear. On the left side of the device are the power button and volume rocker. There is no fingerprint scanner on the back so it can be assumed there will be an on-screen fingerprint reader–that or something on the side.