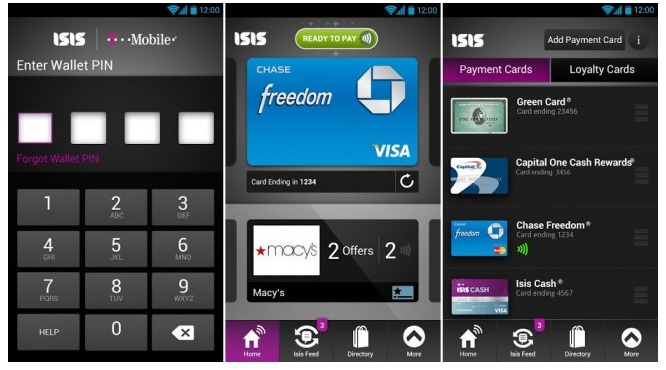 The ISIS Mobile Wallet solution and competitor of Google Wallet has apparently launched a bit premature this afternoon. We’ve been hearing rumors and reports suggesting ISIS will launch for T-Mobile on October 22nd, but today the T-Mobile specific version has landed in the Google Play Store.

With only one carrier having full support for Google Wallet, ISIS is here to help out the folks on Verizon, AT&T, and of course T-Mobile. We haven’t heard much from the mobile payments company as of late, but the leaks have slowly been appearing. This was originally supposed to kick off late this summer and even in September but that never happened.

We’ve been seeing ISIS appear in recent updates from both T-Mobile and Verizon, and both are supposed to be starting a limited test period later this month if rumors are correct. T-Mobile recently went on record detailed what they’ll do with ISIS and NFC payment solutions. Then Verizon’s DROID Incredible 4G received an update with ISIS support.

So far the T-Mobile branded ISIS Mobile Wallet app that is available right now won’t be of much use. You’ll need a T-Mobile SIM that has NFC support, a NFC and ISIS capable device, and of course a retail store that accepts ISIS instead of Paypass. T-Mobile offers the Galaxy S II, Galaxy S III, and the Amaze 4G with NFC capabilities just to name a few. We should be hearing some official statements from both T-Mobile and ISIS sometime soon so stay tuned if you’re interested in mobile commerce.