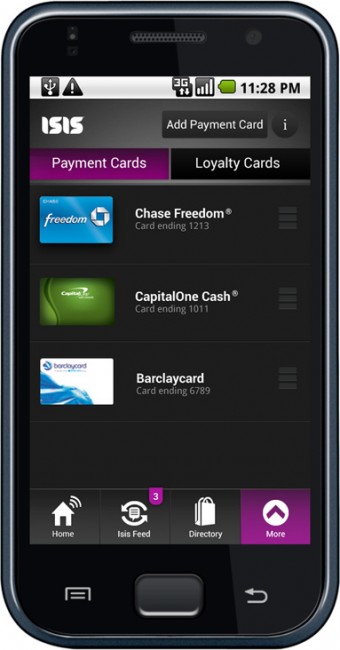 There’s been a lot of talk as of late regarding mobile payment systems. Google Wallet is probably the most widely known but the lack of carrier support has caused them some issues. That is where Isis comes is. Isis is a new mobile payment system we’ve been waiting for that is part of a joint effort from carriers like AT&T, Verizon, and T-Mobile all tossing huge sums of money their way. New details claim it could launch in September.

Earlier today T-Mobile updated their Galaxy S II with Isis and NFC support, being the first device to openly announce and support Isis, but they aren’t the only ones. According to Bloomberg Isis will be launching nationwide starting in September, and supports multiple devices already so we should be hearing more very soon.

According to Droid-Life there is already a list of approved for Isis mobile payments (wallet) support. Since the Now Network is the only Google Wallet supporter they aren’t included here. This is the initial device support list for Isis when (and if) it launches next month.

That is a pretty small list if you ask us, but at least it’s a good start. Sadly I don’t see the Galaxy Nexus listed — but I’ve been using Wallet on my Verizon Galaxy Nexus for months. Hopefully over the past few months Isis has received a major overhaul because if the image above is any indication, their user interface is terrible. Google Wallet has came a long ways and is quite awesome if you ask me. It supports all major credit cards too.

Bloomberg reported that Austin, TX, and Salt Lake City, Utah, will be among the first locations to receive support with more soon to follow. I don’t know about you guys but we are big fans of Google Wallet here at Android Community, we just wish they’d take off and get carriers on board. Stay tuned as we’ll be learning more about Isis and their plans soon.