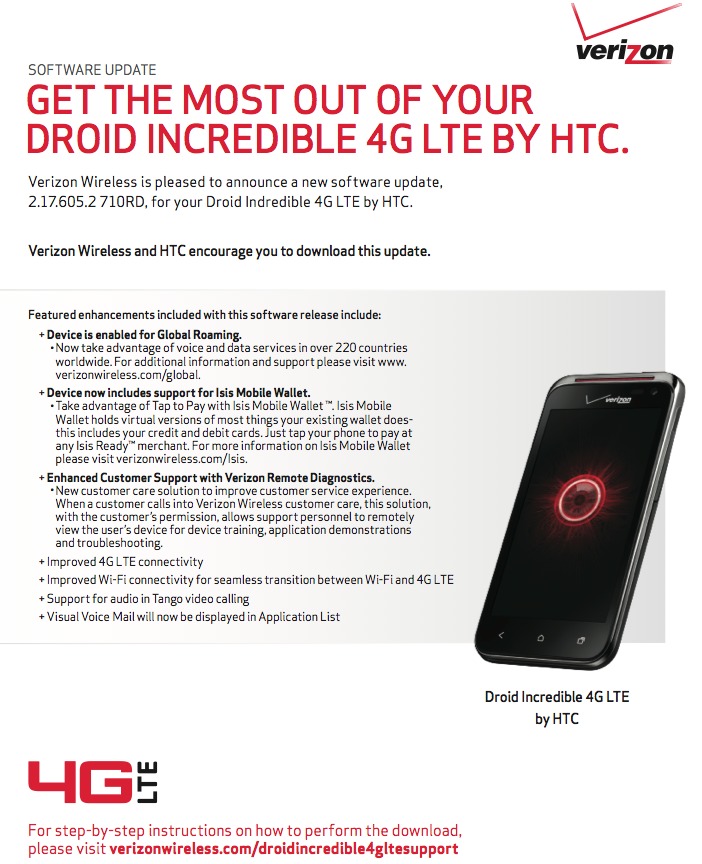 Today news has arrived that the folk at Verizon and HTC are sending out a quick update to their mildly popular HTC DROID Incredible 4G smartphone as we speak. It looks like DROID Inc 4G owners will be getting a small update that fixes a few bugs, adds some new features, and will bring support for ISIS Mobile payments — the Google Wallet competitor. More details below.

As usual, the update is detailed over on Verizon’s support page with all the details. Some of the notable changes out of the gate are the fact that they’ve now enabled global roaming on the smartphone. So users going out of Verizon’s reach in another country will be allowed to roam globally — at a price of course.

Verizon and HTC have also added support for ISIS Mobile Wallet, which is a combined effort from multiple hardware partners and carriers to come up with an NFC mobile wallet solution much like Google Wallet. Personally we just wish they’d all use Google’s solution — but everyone wants a piece of the pie. Then just like multiple other Verizon smartphones they’ve added the remote diagnostic tool. This will enable customer support to basically help with any issues manually. They can even wipe the device right from their desk. More details are available in the support document below.

Then finally but certainly important is updates to 4G LTE. Verizon states that they’ve improved 4G LTE connectivity in general, and the handoff from 3G to 4G should be quicker, more seamless, and as an end result save battery life. They’ve also improved the transition from WiFi and 4G LTE according to the documents. This has just hit the Verizon support page so users with a DROID Incredible 4G should see the update arrive within the next 24-48 hours as usual. Enjoy, and let us know in the comments below should you have any issues.