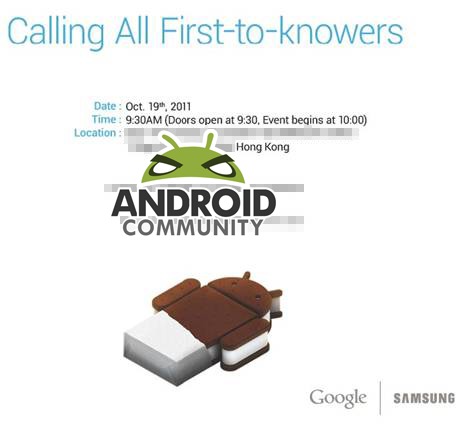 Who is finally ready for some Ice Cream? Just hitting the wires we now can officially confirm that Google and Samsung are all set to unveil the Galaxy Nexus and Android 4.0 Ice Cream Sandwich next week on Wednesday, October 19th in Hong Kong at 10AM. Yes the Samsung Mobile unpacked that was canceled last minute will now take place next week, so the wait is only 6 more days. I’m giddy with excitement, what about you guys?

The Samsung Nexus and Ice Cream Sandwich news has been going crazy the last few weeks and it all started with the Samsung Nexus teaser video. We then started seeing all sorts of rumors and the Android Developers YouTube Channel even confirmed the ICS launch. Most likely the event will still be streamed on that same developer channel so be sure and stay tuned.

In cased you missed all the Ice Cream Sandwich last week we have some leaked screenshots showing the OS, and the new Samsung Nexus device was leaked on video too. For now everything is still a complete mystery although the countless leaks have given us a pretty good idea of what to expect come October 19th when the world will finally see Android 4.0 Ice Cream Sandwich and the Samsung Galaxy Nexus device. I’m still holding strong that it will be called the Samsung Galaxy Nexus, but the possibility of Prime is still floating around but don’t worry, we will all know come October 19th.

Will Android 4.0 Ice Cream Sandwich and the Nexus be all we hoped for? Find out next week as we’ll be there LIVE to cover the entire event and get plenty of pictures and video. As a little reminder at 10AM Wednesday the 19th in Hong Kong, it will actually be Tuesday night here in the US. So be sure to check your local times because that is Tuesday night at 7 PM PST and 10 PM EST — Break out the coffee and be ready to party.