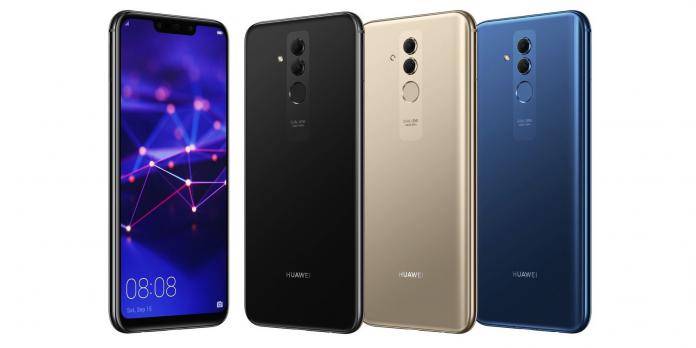 Huawei is unfazed even when it is facing some challenges in the United States. A defense policy bill banning Huawei and ZTE was recently signed by President Trump but the top Chinese OEM believes it is “ineffective, misguided, and unconstitutional”. It still wants the best for the consumers so it will continue to design and develop new smarter phones. Next device to be added to its roster is the Huawei Mate 20 Lite that follows the Huawei Mate 20 Pro.

The company which just overtook Apple in the global mobile market is set to introduce the new Huawei Mate 20 phone series. We’ve seen the leaked images and specs of the Lite variant. The Huawei Mate 20 Pro was also leaked with a large display with an on-screen fingerprint sensor and triple cameras.

Master Leakster Evan Blass (@evleaks) posted an image of the Huawei Mate 20 Lite that shows a notched front display and dual rear cameras in a vertical orientation and a fingerprint sensor. While those are common features you can find in some of the latest smartphones on the market, the phone is believed to also come with a 3D camera setup.

The 3D camera system may mean three cameras but we see two cameras on each side. Or there could be four. That is a possibility but the 3D feature may also be delivered with the help of an application or software. Huawei could be going after Xiaomi since it’s the only brand we know that has a phone with 3D camera–the Xiaomi Mi 8.

The photo shows a notch with two cameras inside. We see the earpiece as well. The 3D camera, we’re assuming, will be used for facial recognition.

Hopefully, the  Huawei Mate 20 Lite will be announced together with the Mate 20 and Huawei Mate 20 Pro sometime in October. Rumor has it Huawei will also introduce its very own foldable smartphone by then and ahead of Samsung.

As with the past Huawei Mate phones, the Mate 20 devices will be equipped with the Kirin 980 chip. Color options are: Black, Blue, and Gold. Don’t expect an IFA 2018 announcement because that will be too early.

Another set of Huawei Mate images surfaced at DigiQQ from an anonymous source. We learned the phone will have a large 6.3-inch AMOLED screen while only the Mate 20 Pro will have the 3D camera but we have yet to hear any confirmation. Let’s wait and see. October is still a few more months so expect related rumors, speculations, and leaks.