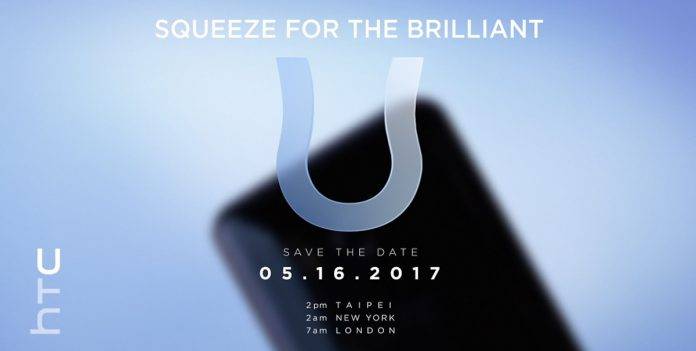 HTC is scheduled to make another major announcement next month. It’s still a few weeks from today but HTC has just released a teaser that tells us the HTC U (Ocean) could be arriving soon. We’ve been hearing a number of information about the next smartphone from the Taiwanese tech giant including the possibility of having no 3.5mm headphone jack. Some renders were also leaked early with some specs and features listed.

This flagship phone could be the next U phone designed especially for you. It’s also the next phone after the HTC U Ultra which recenly got a price cut. That discount got us scratching our heads because the U Ultra is relatively a new phone. In fact, its Sapphire glass 128GB version was just revealed in Europe this week.

The HTC event is being teased with a ‘Squeeze for the Brilliant’ tagline. Event is happening on May 16, 2017, Tuesday at 2:00AM (Eastern) which is also 11:00AM (Pacific). HTC will announce the new ‘U’ device from Taipei, Taiwan. Event will be streamed live on Htc.com so everyone can witness what HTC has in store fo the tech industry. The new HTC U Ocean? Your guess is as good as mine so let’s just wait and see.