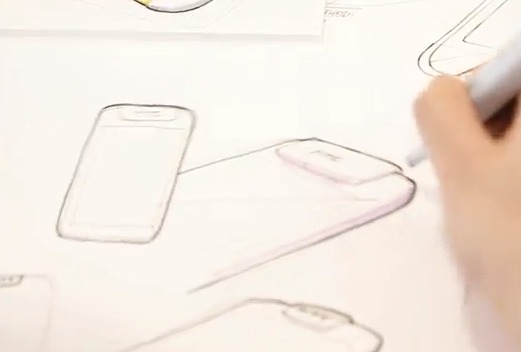 It’s always enjoyable to see new devices, especially when they’ve got a chance at running Android, and ESPECIALLY when they pop up out of nowhere when you least expect them. Today we happened upon some drawings being done over in Taiwan by the HTC crew rolling out a recruitment video attempting to grab some new minds for one of their ideation centers. This video comes straight from HTC, so we can’t imagine that the images you see below are TOO secret, but they’re fun to glimpse at nonetheless.

You’ll see in the gallery below a couple of early looks at the HTC Pyramid (a device we now know turned into the HTC Sensation) as well as what appears to be some drawings of different iterations for the HTC Salsa and ChaCha, both of them the Facebook phones we now know and love. There’s also quite a few instances where there’s an HTC device we cannot identify. Check out around :28 for some wireframes of a new looking device, see around :38 for what appears to be a Verizon QWERTY side-slider, :48 has some interface design looking like they’re going to keep integrating widgets into the lockscreen, :50 for the Desire S(?), and right around 1:10 for a few HTC devices with a big honker of an earpiece.

Do you recognize any of these devices as already existing, or can you tie them to products you may have heard about possibly existing in the near future? HTC always comes with the heat, especially this year upon the bringing of the battle to Android with a slew of new devices, almost every single one of which we’ve now reviewed in one way or another.