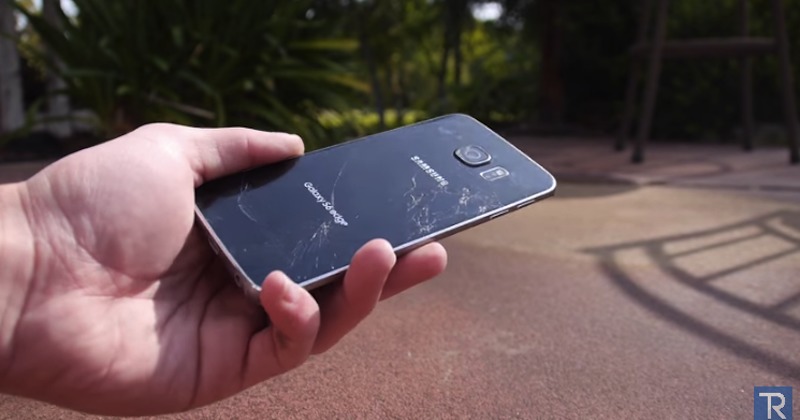 A recent water test has already proven that the Samsung Galaxy S6 edge is water-resistant but not waterproof. The smartphone is also faster than the iPhone 6 when compared in a speed test. We know the phone is rough and tough too after surviving that brutal drop test. We agreed that there is a more proper and scientific way to stress test a phone–the same way OPPO tested the OPPO R5 and OPPO N3. But you know, there are geeks who find joy in abusing some gadgets.

Honestly, watching all these stress tests stresses me. They’re all nerve-wracking and this latest video from TechRax had me saying “Ouch!” a few times.

We said the phone is okay to be dropped after that brutal drop test but this video proves otherwise. Sure, the Samsung Galaxy S6 edge may still work but with all those full-on scratches, dents, and cracks after falling a number of times, the phone looks badly damaged.

The Samsung Galaxy S6 edge which is made of glass in the back and the front, plus those curved edges, looks really susceptible to drops. TechRax simply wanted to know if the the phone was really strong so a side drop test, a back drop test, and a front-facing drop test were done from approximately five feet in height. It’s the average height from a person’s standing position and from where you would most likely accidentally drop the phone.

The Samsung Galaxy S6 edge survived the side drop test but with a small marking on one corner. There was no damage at the back and on the screen. Phone still looked flawless. However, after the back facing drop test, the Android phone received many scratches. The glass on the back shattered but still intact.

Finally, after the front-facing drop test, the most nerve-wracking of all, the Samsung Galaxy S6 edge all damaged everywhere still worked. You can still use the phone but the cracks, dents, and scratches are certainly unattractive. The conclusion? Use a protective case because the Samsung Galaxy S6 edge will not survive the harsh drops. The phone still works but with all those cracks, you can expect some glitch on the display which can make touching, swiping, and typing difficult.