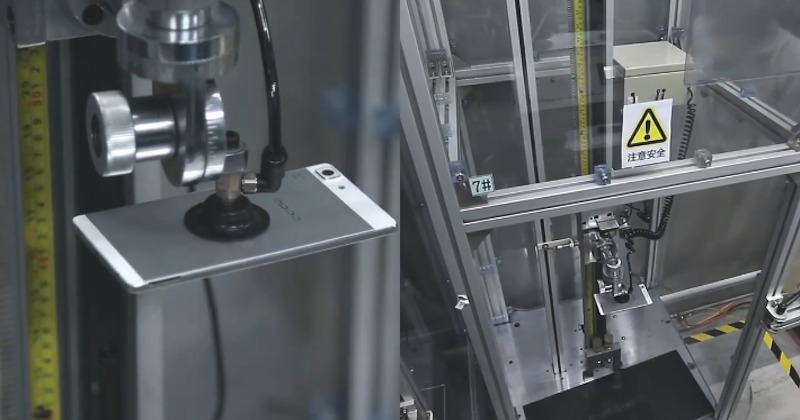 Built like a tank. This is how O-fans describe the OPPO smartphones. The Chinese phone manufacturer was proud to release a video of a Smash and Grab Test, showing us how they do it inside the factory. Drop test? There really is a more scientific way to do it. Unlike the Samsung Galaxy S6 edge drop test did by a Korean YouTuber, this test by OPPO gives us an idea not only how tough the phone is but also how the professional geeks are over at OPPO do their job.

This video shows how the company tests the OPPO R5 and the OPPO N3. It’s a standard test for the units as part of the production process. Honestly, this isn’t nerve-wracking as the S6 edge video we’ve seen a while ago.

First part of the stress test involves putting on 25 kgs of pressure on the phone. An OPPO phone is placed inside a belt. Heavy pressure is given three times. For the second round, smartphone is dropped several times onto marble from a height of 125 cm (about 49 inches). Phone is dropped with different sides facing the floor. The result? OPPO phone still appears to be intact despite the drops.

Now this is how you do stress tests. Dropping and smashing any mobile device on a concrete floor may seem easier but putting on heavy pressure and dropping it from a certain height as a standard shows great quality control. This way, we can be assured that all phones are tested to pass the OPPO standards.