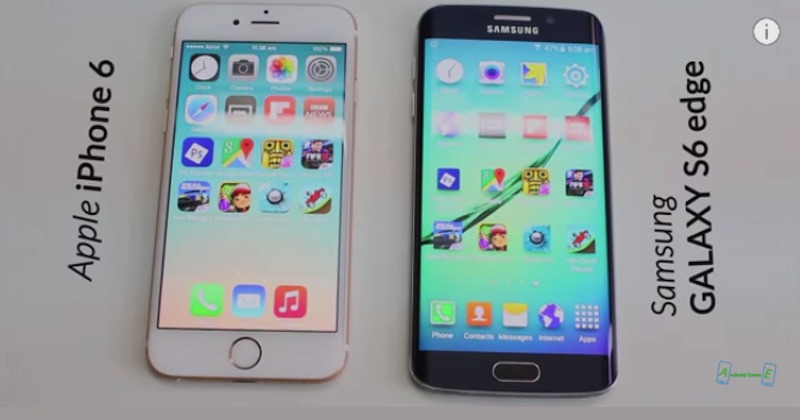 How fast is the Samsung Galaxy S6 edge? We already know the phone is tough and ready for rough use according to a recent drop test video we’ve seen but is the phone speedy enough? The South Korean tech giant boasts that the Samsung Exynos 7 Octacore processor makes the Galaxy S6 edge very fast. This is the first time Samsung has ditched the Qualcomm Snapdragon for its very own Exynos processor. It seems to be a good decision now that there’s a demo video proof that the Samsung Exynos 7 is faster than the A8 processor used on the iPhone 6.

Watch the video below and you’ll notice early on that the Galaxy S6 edge responds faster compared to the iPhone 6. The two smartphones were installed with the same set of apps on the home screen. With two hands, err…fingers, the two latest flagship phones from the top 2 phone makers were tested for speed. Apps on each row were opened at the same time. The Galaxy S6 edge appears to be the winner in this kind of speed test.

Opening all 16 apps only took 2 minutes and 9 seconds on the Android-powered Samsung Galaxy S6 edge while it took 2 mins. and 17 seconds on the iPhone 6. The 8-second difference may seem nothing but in the mobile arena, it matters. (Or did you really notice?)

I don’t doubt that the Galaxy S6 edge is fast but some commenters on YouTube have noted that the apps on the Samsung phone were already running in the background and hand movement on the iPhone 6 was slower. Or maybe those were Fandroids and Apple Fans battling at the comment section. What do you think?