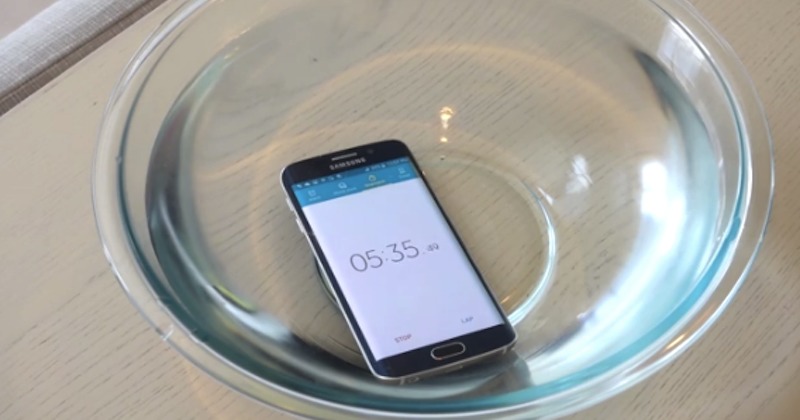 After seeing that brutal harsh test yesterday, we’re pretty convinced that the Samsung Galaxy S6 edge is really tough. Another test even showed us that it’s faster than the iPhone 6.  The smartphone is not mainly a rugged phone because the South Korean giant has the Galaxy S6 Active coming soon all rugged and waterproof. Unlike the Galaxy S5 model, both the Galaxy S6 and Galaxy S6 edge are not officially waterproof/water-resistant but this water test proves otherwise, sort of.

A certain Youtuber named Keaton aka TechSmartt recently did a water test for the S6 edge. He knew that the smartphone didn’t have any IP certification but he went ahead to place it underwater. He first thought that phone would die in the first minute but it held up–not even any air bubbles. All things good until the 22nd minute when the phone suddenly died. We’re not sure if battery was already low but the tester tried charging the phone after getting all the water out and drying it off.

Some water seeped inside but phone is still working. While charging, the Galaxy S6 edge has been turning on and off for some time and has been acting up. Water definitely hit that other parts. The front camera has water inside so you can’t take clear photos now.

Phone is screwed. It took Keaton some time to turn the unit on. Battery window showed up and phone was making a lot of noises. Obviously, a lot of components have been affected. You can still use other features but phone has been “spazzing out” according to Keaton.

TechSmartt’s recommendation? Don’t put the Samsung Galaxy S6 edge under water that long. It’s okay to drop the phone and splash some water “accidentally” because it’s a bit water-resistant but definitely not waterproof.