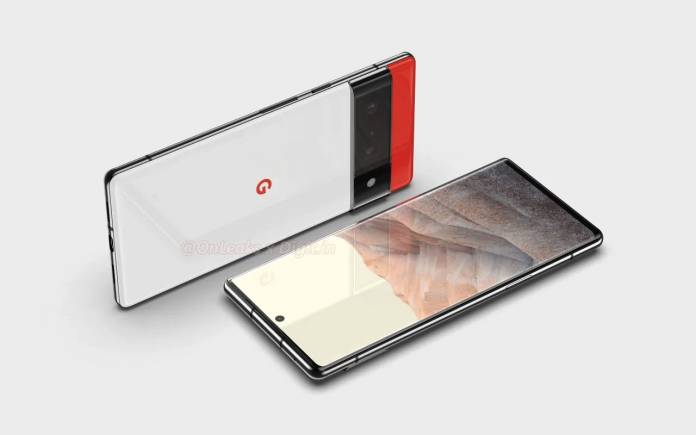 Google may not be revealing any new smartphone at the Google I/O 2021 but we’re certainly learning a lot from the tech giant. Much has been announced about Android 12, Wear OS, Android TV, Google Play Store, and the smart home protocol called Matter. We can expect more good news will be detailed in the coming days. In the coming months, we will anticipate for the Google Pixel 6 series. There may be two variants: a regular Pixel 6 and the Pixel 6 Pro.

As early as March, we heard about the possibility of the selfie camera of the Pixel and Pixel 5a being moved to the center. The smartphones may use the new “Whitechapel” chip by Google. Just last week, Google Pixel 6 and Pixel 6 Pro image renders surfaced on the web.

A new set has been published by OnLeaks and we have got more information about the upcoming device. The Google Pixel 6 Pro is said to come with a large 6.67-inch curved screen. It will definitely arrive with Android 12 OS.

When it comes to imaging, it may be equipped with a periscope telephoto camera as part of a triple rear camera system. The Pixel 6 may only come with a dual rear camera setup. The phone’s design is different and actually looks cooler. It can be assumed the Pro variant will just be the bigger version of the regular model but with better specs.

The camera module on the rear appears to be a horizontal camera island. We’re looking at a main wide-angle camera with periscope telephoto and another unknown sensor plus an LED flash.

The Pixel 6 Pro appears to have a more obvious chin. It may still feature a dual-tone design. Dimensions could be 163.9 x 75.8 x 8.9mm plus 11.5mm on the camera bump. The AMOLED display will be 6.57-inches curved. The selfie shooter will be placed under a single punch-hole. The refresh rate is still unknown but we can look forward to an in-display fingerprint sensor.

Other possible specs include dual stereo speakers, wireless charging support, and a SIM card slot on the left. Google could decide on using its own chipset. The Pixel 5a 5G may still be powered by Snapdragon 765 chipset so we’re looking forward to the Pixel 6.