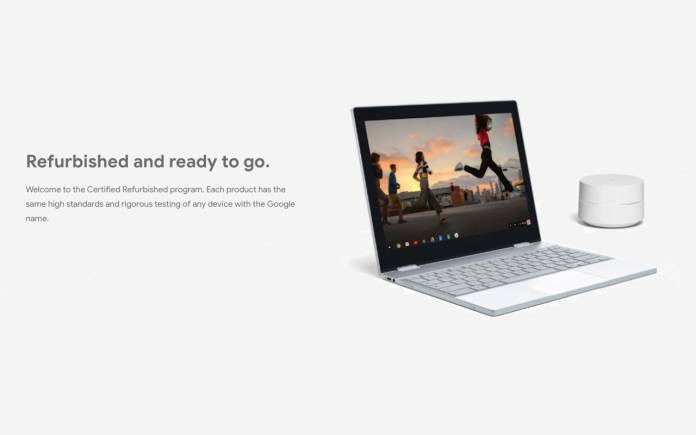 There is a special sale ongoing at the Google Store right now. Some refurbished Google devices are on sale. This means they can be yours for lower prices compared to brand new units. The tech giant offers the Certified Refurbished program. All products under it still have the same high standards. They’ve been tested for quality control so every consumer gets the same top quality all the time even if the products are considered refurbished. On the Google Store right now, you can buy the refurbished Pixelbook and refurbished Google Wifi 3‑Pack.

The refurbished Google Wifi 3-pack will let you download, stream, and share content. It boasts a quad-core ARM CPU, 512MB RAM, and 4GB eMMC flash. The device covers up to 4500 square feet. For only $179, you can get three Google Wifi units to use at home.

We’ve been expecting a Pixelbook refresh since last year but nothing yet. There was that Pixelbook Nocturne sighted with a detachable keyboard. A new Pixelbook image was also sighted on a YouTube TV ad. Rumor has it, a Pixelbook 2 will be arriving soon although we doubt it will be ready by October 15.

As for Google Wifi, the device was announced in 2016 for a smarter home. It since received several upgrades but the latest we heard about it was last year. The Google Wifi app was updated to check bandwidth for your devices via Network Check.