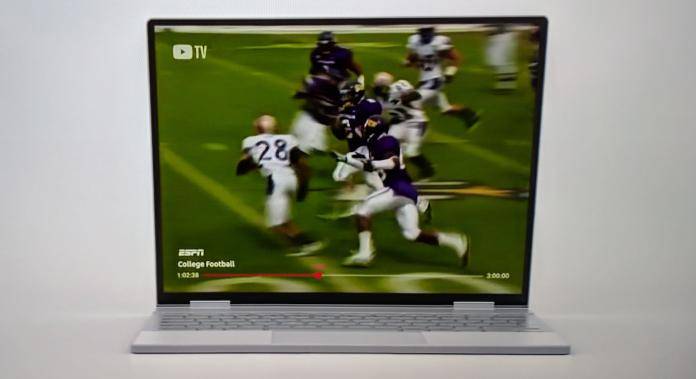 The next ‘Made by Google’ event is all set for October 9 as rumored earlier. It’s going to happen in New York and we’re expecting to see the new Pixel 3 and Pixel 3 XL phones plus the next-gen Pixelbook. There won’t be a Pixel Watch but we’re so looking forward to a new Google Home device. Maybe a new Chromecast will roll out as well. We’ve been saying the Pixelbook refresh is coming later this year and just yesterday, we saw a video that shows a hybrid tablet-notebook with a detachable keyboard.

Not that a hybrid tablet is new but this one is believed to be the Pixelbook Nocturne. The Pixelbook is also known as ‘Atlas’ so there may be confusion in some levels. It doesn’t matter how we call it, we just want to know more about this Pixelbook.

As a follow-up info, an image was taken from a YouTube TV ad. (See image above)

The photo was shared over on Reddit where a lot of people are already discussing the mysterious device. The earlier leaks are not clear so this is the best illustration so far.

To be honest, Pixelbook details are elusive these days but we’re expecting more will be revealed before the October 9 launch. Let’s wait and see.