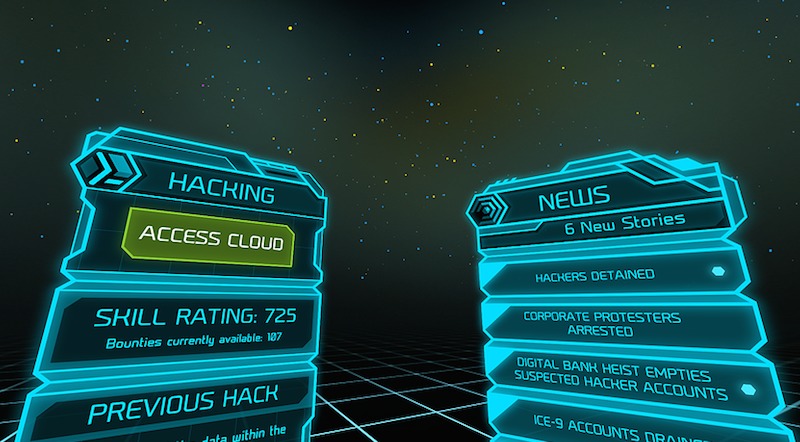 Now that AT&T announced the availability of the Samsung Gear VR in the US, we expect to hear more announcements of new games for the wearable device. We already know a few: Land’s End by USTwo, Temple Run VR by Imangi Studios, theBLU, Anshar Wards, HeroBound, and VR Quest. Recently announced and previewed is Darknet by creator of the game Auralux.

Made by indie game designer E McNeil, Darknet has been under development for more than a year. It’s available for download for free from Darknet’s website but it should be ready on the VR app store soon for $10 USD. This is after the first adopters of Gear VR have received their units.

This VR strategy game’s theme is all about hacking. Darknet offers a rich 3D-like experience similar from old movies like the Lawnmower Man, Matrix, Tron, and Hackers. If you’re a geek and are familiar with old school hacking and related movies, you’ll appreciate this in a retro-future kind of way.

Virtual reality gaming is here but it’s not quite perfect. Even the Samsung Gear VR recently released is just an Innovator Edition (not the final version) but Oculus and Samsung are already working to perfect the device.

Watching the trailer below reminds me of the early days of the Internet, hacking, cybercrime, etc. Imagine all those scenes being experienced right on the Gear VR.

Excited much? Here is an overview of Darknet on the Samsung Gear VR:

It’s kinda hard to explain this hacking VR game but this is the (retro) future. Stay ahead of security, drop viruses, and crack codes on a virtual reality computer network. Make good use of hacker tools to finish this strategy-puzzle game made especially for the Oculus-powered Samsung Gear VR.