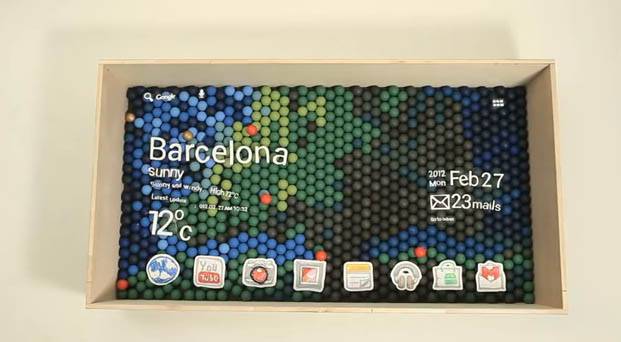 We’re at t-minus three days until the festivities start in Barcelona, and Asus isn’t letting the likes of HTC and LG have all the premature fun. In a new video posted to YouTube, the company teased a high-resolution tablet with an abstract, 17-second commercial before Mobile World Congress. There’s no hardware on display (a drawer with colored balls stands in for a Honeycomb/ICS home screen) but the teaser “twice the detail, twice the fun” leaves little room for doubt. Presumably, Asus is talking about a tablet with more than the standard resolution – i.e., more than 1280×800.

That leaves us with a couple of possibilities. It could simply be a reiterated launch for the Eee Pad Transformer Prime 700, a slightly redesigned version of the Transformer Prime with a 1920×1200 screen and better engineering to prevent GPS and WiFi issues. Then again, we could be looking at the TF300T, which appears to be an upgraded version of the original Transformer, packing a 1080p screen, better processor and the same dockable keyboard. The 300T would take a place between the $250 Memo 370T and the current Transformer Prime in Asus’ expanding tablet lineup. And let’s not forget Asus’ form-factor defying Padfone, also due for an MWC unveil.

If Asus wants to break into the high-resolution tablet game, it had better hurry: both Lenovo and Acer have shown 1920×1200 tablets running the Tegra 3 processor. And rumors persist of an 11.6-inch Samsung tablet with an incredible 2650×1600 resolution – a res that’s the standard for 30-inch computer monitors. All will be revealed on Monday, February 27th, so keep an eye on the Mobile World Congress portal to get the latest news.