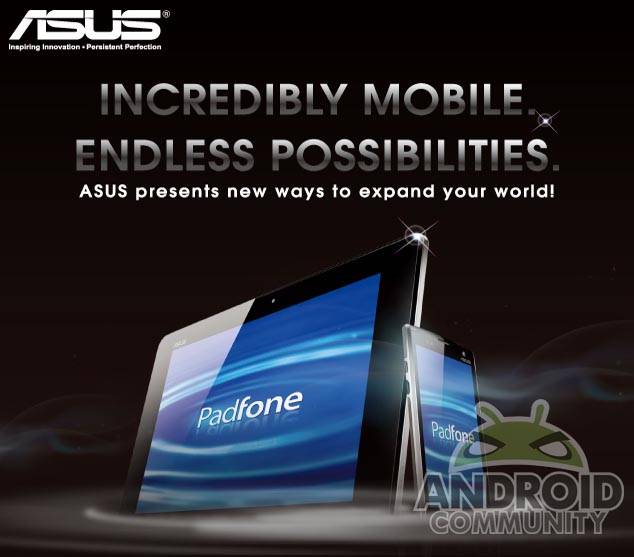 Without a doubt, one of the most interesting pieces of hardware3 from a design and form factor standpoint has been the Padfone from Asus. We first saw the dockable smartphone/tablet way back in May of last year as a concept device, but over the last eight months it’s been steadily progressing to a retail release. We saw refreshed hardware at CES under glass, but rumors pegged it for a final, official unveiling at Mobile World Congress. Considering the invitation we just received to Asus’  press conference, we’d say those rumors can be put to rest.

To refresh your memory, the Padfone is a unique smartphone with a ~10-inch tablet add-on device. Slide the phone into the dock and your data, apps and media appear on the tablet, using Android’s tablet interface. Back in May this was a bit of a pipe dream, but the combination of code for both smartphone and tablet interfaces in Android 4.0 Ice Cream Sandwich appears to have made it a reality. In effect the tablet add-on is just a bigger screen and battery for the smartphone… because that’s all it needs. Presumably, that means you can use your phone’s cellular and data connection to make calls and texts as well.

Given the conceptual nature of the Padfone, hardware specifications are a little hard to come by, but we do know that the smartphone uses a 4.3-inch AMOLED display (or at least it did when we saw it at CES). Based on the revised render in the invitation, it looks like the capacitive navigation buttons may have been abandoned. There’s no way to know the dimensions of either piece, but it’s safe to say that the tablet portion needs to be considerably larger than other ten-inch devices.

There’s been a lot of talk about docking and interfaces in Android lately: rumors persist that Android Jelly Bean includes a desktop mode activated by an external screen, and a new ARM-based version of Ubuntu will be available to Android OEMs later this year for the same purpose. Of course Asus id no stranger to docking hardware, since the Eee Pad Transformer and Transformer Prime include keyboard attachments with extra ports and batteries. We can’t wait to see what Asus brings to the table in Barcelona – keep an eye on our Mobile World Congress portal for the latest news.