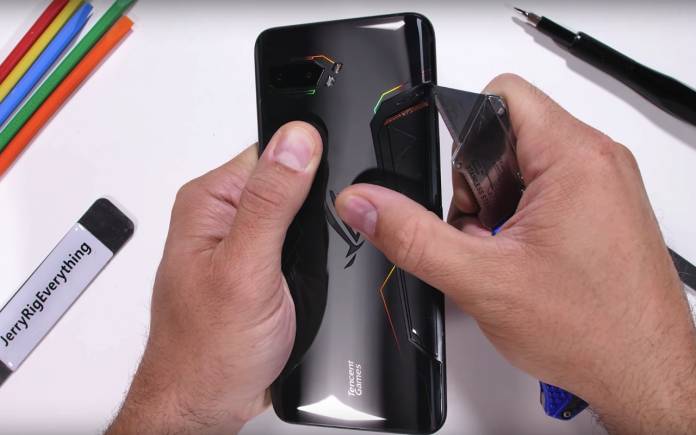 It can’t be said yet that gaming phones are a dime a dozen but we’ve seen and tried a number of them. The first to be introduced is the ASUS ROG Phone once named as the ultimate gaming phone. It’s getting a second iteration in the form the ASUS ROG Phone 2 which was first mentioned back in June. We said it would offer a 120Hz display experience and may use the latest Snapdragon 855 Plus chipset with up to 12GB of RAM.

The phone has survived a Durability Test. We wanted to know if it would survive because its price is no joke. Unlike other gaming phones that are affordable when with the premium SoC, this one is priced at around $900.

Is the ASUS ROG Phone 2 a good investment? It depends on who you’ll ask. For such price, it’s something that needs protection. It comes with premium specs such as Snapdragon 855+ processor, 120 Hz AMOLED display, 12GB RAM, and a large 6000mAh battery. The dual rear cameras aren’t as good but capture decent photos and videos.

Opening the phone is easy with some heat and taking off the screws. The ROG Phone 2’s copper vent has been discovered to be more an opening to let heat out. It’s the only way to cool the phone.

It’s a bit disappointing because gaming phones need to be “cool” all the time. But good news, there is a large heatsink discovered underneath that could help in dissipating the heat.