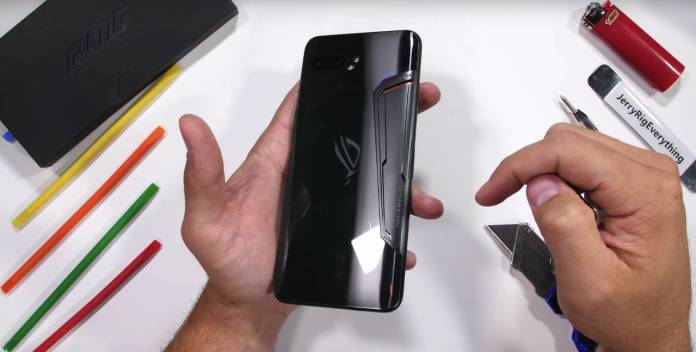 The ASUS ROG Phone 2 was first mentioned back in June. We said it would offer a 120Hz display experience which meant there may only be a few games that can take advantage of the feature. It mentioned t use the latest Snapdragon 855 Plus processor, with up to 12GB RAM, and would be really powerful. The device did debut at the IFA 2019 with the ASUS ROG Phone II Ultimate Edition being shown off. We also listed games that run 60fps to 120fps.

It was only a few weeks ago when the ASUS ROG Phone 2 was made available on Mobile Advance and B&H in the US. Zach Nelson has already received a unit and quickly tested the smartphone. The result? Well, you know, the usual.

The screen of the new gaming phone also scratches at level 6 with a deeper groove at a Level 7. The ultimate gaming phone must be tested this way because of the “ultimate” description–120 Hz refresh rate, Gorilla Glass 6 protection, AMOLED screen, and more.

When heat is applied to the screen, it doesn’t recover. As for the Bend Test, the ASUS ROG Phone 2 has survived. It did flex but it’s normal. It’s not damaged whatsoever but we see the shoulder buttons and USB port.