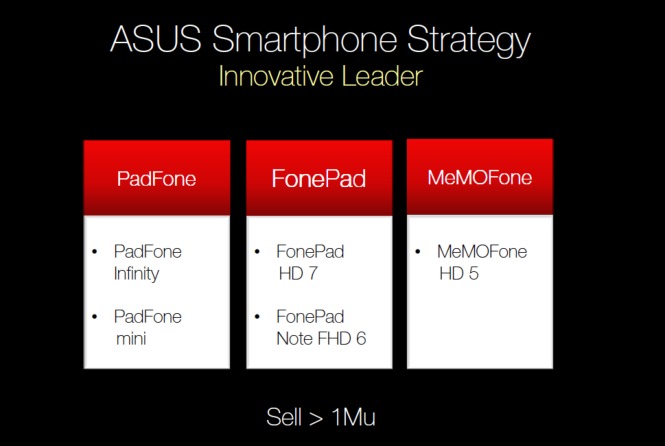 At a talk delivered in France, ASUS laid out its roadmap for mobile devices. And in it, we get a glimpse of not only its current lineup but it’s future devices as well. And it seems that we have quite a few coming our way.

ASUS has made known its intention to penetrate the US smartphone market and it seems it will be doing this by starting to consolidate its line of devices. Already known is its Fonepad HD 7, a 7-inch tablet with full phone functionality, and the PadFone Infinity, a phone that slides into a tablet that serves as a larger display and additional battery. We have also heard of the stylus-enable 6-inch Fonepad Note. What we have not yet heard of is the PadFone Mini and the MeMOFone HD 5. Based on the “MeMO” branding, we could speculate that the latter will be a budget 5-inch smartphone.

The company is also drilling down into its tablet line. We’re familiar with ASUS’ hybrid tablet/laptop Transformer series, although we’re not sure which of its current Transformer tablets are listed. ASUS has already launched the MeMOPad HD 7, which is now available for pre-order from several online retailers. And who wouldn’t know about the new Nexus 7 that was unveiled last month? But now we’re clued in that ASUS is planning to do yet another budget tablet, this time around the now popular 8-inch size. 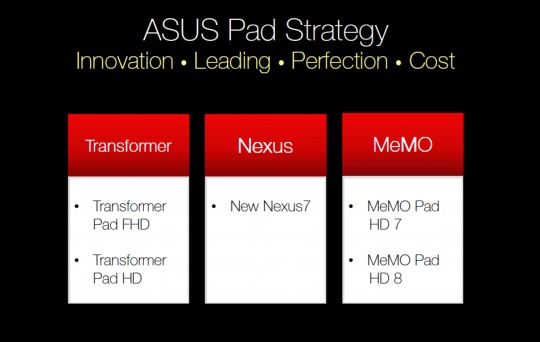 It’s sometimes good to see details like these that show companies whittling down their products and focusing on key strengths instead of trying to produce a tablet for each and every variation. It’s also comforting to know that ASUS has realized that people might want a phone that is smaller than 7 inches.