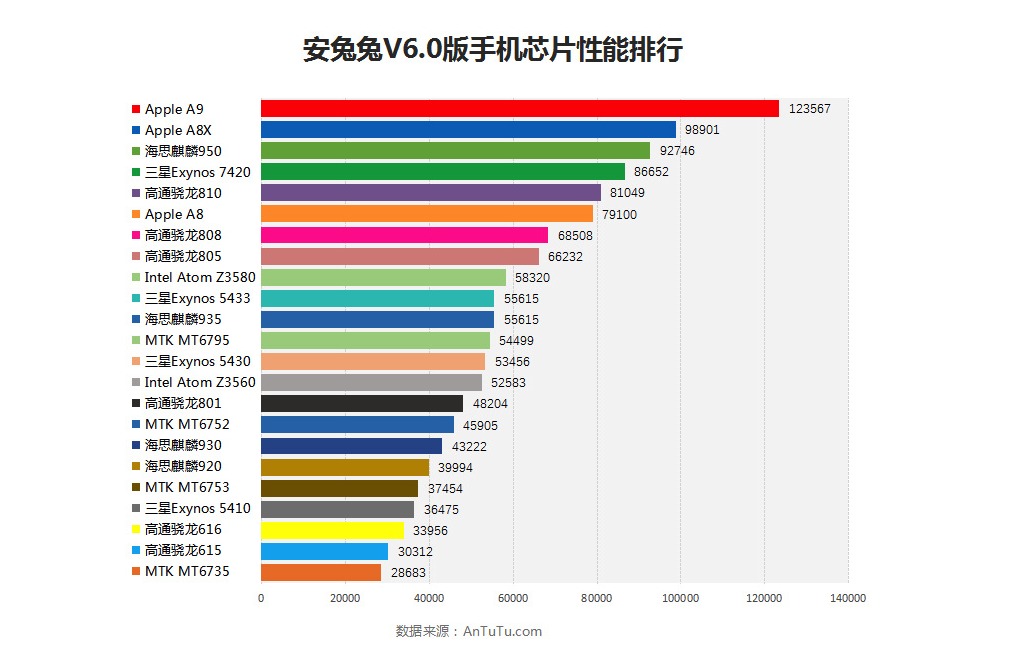 Whether you like it or not, Apple’s very own A9 processor is one of the fastest processors today. We may be talking about the the latest Snapdragon, Exynos, or Kirin but according AnTuTu, the A9 beats the rest of the chipsets being used by mobile devices available in the market today. A chart was sighted on Weibo and now we’re sharing with you what the benchmark test says, or at least, the average scores gathered user submissions.

The Apple A9 received a high score of 123,567 on AnTutu followed by another Apple processor–the A8x (found in the iPad Air 2). We’ve been hearing that the A9 is indeed one of the fastest. It’s the one used on the iPhone 6s and iPhone 6s Plus. There’s no way for us to test that but user submissions now tell us as that it is.

Trailing behind is the A8X with 98,901. Interestingly, ranking third and the first for Android, is the Huawei Kirin 950–the same one found in the Huawei Mate 8 and Huawei P9 Max. This isn’t surprising because the Kirin 950 has been beasting it up in AnTuTu’s databases, scoring high, and totally impressing the mobile industry. It scored 92,746 and is followed by the Exynos 7420 found in the latest Samsung Galaxy S6 variants, Note 5, and the Meizu Pro 5. Trailing behind the Samsung chip is the Qualcomm Snapdragon 810 completing the top five.

The AnTuTu list is in Chinese but here’s a complete list of the AnTuTu Mobile Phone Chip Performance Ranking:

We’re not surprised that the Exynos is listed after Apple. This year’s Galaxy S6 phones run Exynos and they’ve received great reviews and scores on several benchmark tests. Both Exynos and Apple chip are produced by Samsung. Apple just designed the processor but Samsung and Taiwan Semiconductor Manufacturing Company (TSMC) manufactured it.