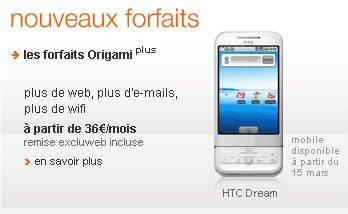 Big Android news this week was HTC’s recently announced Magic handset getting official release windows on Vodafone UK and Orange France. Running Google’s Android, the Magic will offer 3G internet, GPS, a slimmer form [than the current G1], and an on-screen keyboard for typing. Release dates are March 15th for Orange France and sometime in April for Vodafone UK.

In case you’re wanting to keep closer tabs on this bleak global economic state, Google has released an official app for Android to help you do just that. Google Finance is available in the Android Market now for the very appropriate price of $0.00, but only to users in the US. The software has limited stock market support (for now), though the major US indices are covered in near-real time.

More companies are looking at Android as a new and powerful mobile OS for their upcoming devices. Acer has been surrounded by talks and comments regarding the possibility of Android powering their two forthcoming handsets. No concrete answer was given when asked directly if Android was the choice, but an OS other than Windows Mobile was said to definitely be in the cards. Still needing some feature bumps since its original debut in 2006, Road’s S101 HandyPC is rumored to have switched gears from a Linux distro to Android as its OS of choice. Yuhua have also followed up their design of General Mobile’s DLST1 handset with the Xphone-SDK concept. While only a concept at this point, the phone is limited to EDGE connectivity. Considering Android’s dependence on ‘cloud’ computing, this may pose a problem with potential slow-downs.

Potentially ground-shaking news is Android’s perceived ability to give Apple’s OS X Touch (iPhone) a run for its money by 2012. Industry analysts are predicting that current economic conditions paired with Android’s non-commitment to a particular carrier or handset manufacturer will give it the extra boost it needs to catch up with Apple. Also considered was the fact that Smart phones have outsold notebook PCs for the first time ever, possibly signaling more powerful mobile platforms providing the majority of functionality that people need away from their desks. While OS X Touch is somewhat limited in its ability to multitask, Android can accomplish multiple things at once. This could also draw mobile professionals with the need to get more work done while on the go.