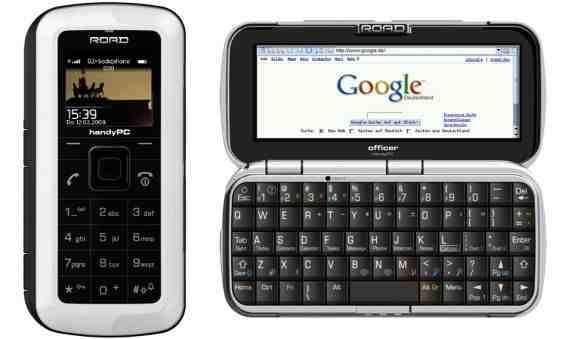 Tucked away at CeBIT, Road have been showing the latest evolution of their S101 HandyPC, a clamshell smartphone with a full QWERTY keyboard and 640 x 240 internal touchscreen.  Originally intended to run a Linux OS with Trolltech Qtopia, according to the latest talk from the show the S101 HandyPC is now looking likely to launch running Android.

The Road S101 HandyPC was first announced all the way back in August 2006, though thankfully the specifications have had a (mild) boost since then.  It’s still not perfect, though, and hopefully Road will be making some more tweaks before its release: the wireless connectivity in particular needs some attention, with the current design maxing out at EDGE cellular data and lacking even band-g WiFi, never mind draft-n support.

As for the Android implementation, while the demo unit didn’t have any for of wireless connectivity active, the OS runs well and seems smooth on the letterbox-aspect touchscreen.  Depending on whether Road do tweak the final specs, and the eventual price, this could be an interesting device to watch come its eventual launch.