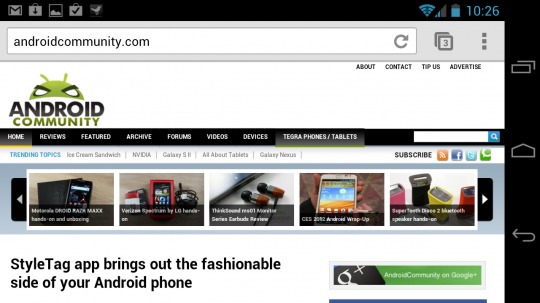 We had quite a few great stories hit the feed today, especially when Google announced their Chrome browser’s Beta release! At this time it doesn’t have Adobe Flash support, but it is blazing fast – and offers a great tabbed browsing experience. You can check out our hands-on with it here. We give it a try on both the Galaxy Nexus and ASUS Transformer Prime.

Today, RIM claimed BlackBerry applications make more money than those on Android. I do agree with them on this issue, yet it’s important not to lose sight of the one billion apps that were downloaded from the Android Market from just December to January. So to clarify – per application, a BlackBerry app may create more revenue; but Android is profiting from many more applications and at a much faster rate.

Motorola’s DROID 4 will hit Verizon this Friday, and they’ll even offer BOGO RAZR’s upon its release in stores everywhere. Coincidentally, Verizon will also be bringing back their double data promotion the same day. It seems they’ve more than enough data to go around, so why not share the wealth?

And those of you HP TouchPad owners will be glad to know that HP has released the source code from its internal Android kernel to the CyanogenMod team! If only this was initiated a few months ago, it would have saved countless hours of work from many developers that were running the project.