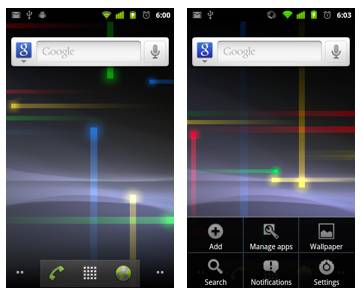 Hooray because today’s the day. Google’s released not only the Nexus S with Samsung, but Gingerbread as well. This version of the Android mobile OS offers speed! Not only that though, as you’re soon to find out, there’s wild additions too! Nothing so big your eyeballs will explode, but close! There’s a new keyboard, a new text selection tool, gyroscope support, power management improvements, VoIP/SIP calling, improved copy and paste, support for NFC technology, and more!

New Keyboard
First of all, the thing that everyone uses every freaking day of the year, the Keyboard. This new keyboard has its keys reshaped for faster input and editing, bringing up word suggestions also depending on what letters you’re typing. Switching to voice mode allows you not to replace selections, multi-touch key-chording allowing you to type numbers and symbols with keyboard shortcut combos instead of flipping back and forth like you’ve got to now. Included deep inside the keyboard class “android.view.KeyEvent” is support for the following buttons – A,B,C, L1, L2, R1, R2, select, start, X, Y, and Z – aka PlayStation controls.

Copy/Paste
The copy and paste function has been improved to include pressing and holding to select words, stay in selection mode, and copy text for later pasting. Along with this is: 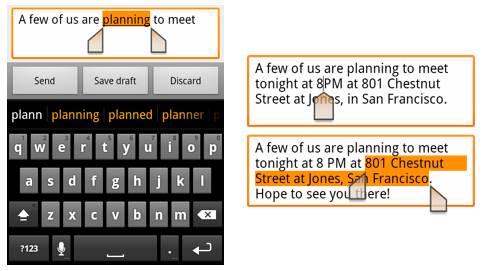 Word Selection
Improvements to word selecting include the aforementioned press-hold, a function iPhone users are already used to using. Once pressed and held, a free-selection mode begins, a place where you can adjust the area you’re selecting by expanding bounding boxes.

Power Management
Improved next is your ability to manage your power usage. Inside your application settings, you’re able to see your battery in how it’s being used by various apps. See how much that Matrix screensaver really is sucking up all your juice! Hopefully soon those task killers will be rendered outdated. 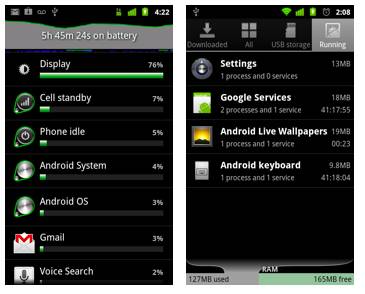 Application Control (Task Killer Killer)
Along these same lines is a shortcut to “Manage Applications” which you can reach in your options menu. From here, you can indeed view all of your applications, how much power they’re using, and you’ve got the ability to stop any app instantly.

NFC Near Field Communication
This is the future of commerce as far as credit cards go. Use this to touch or swipe NFC tag embedded posters, advertisements, other weird junk, to be directed to a website (and more than likely other such actions). In the future, this functionality will work to send and receive money via your handheld device. Excellence.

Internet Calling
SIP Internet Calling addresses can be added to your contacts list and you can make internet calls via Quick Contact or Dialer. Hooray! Of course you’ll need a SIP account for this to work and these features will be turned off or on depending on what your manufacturer or carrier wants.

Downloads Management
A new download manager is in place to work from your browser, email, or other apps. This could be rather helpful I must say so myself.

Camera
Multiple cameras can now be accessed from your one new camera app, just by clicking the “select camera” button.

UI Improvements
Simple changes in the user interface of this Gingerbread system make the whole situation faster, easier, and more power-efficient. One example is the changing of the background to BLACK in the areas that it’ll always be covered up such as the notification bar, menus, and etc. Changes in these menus are also in place to simplify.

Concurrent Garbage Collector
Dalivik VM brings you a lovely new way to collect your garbage during gameplay for apps, this bringing along a whole lot smoother and more responsive playing of game-based apps.

Event Distribution
Touch and keyboard events are now handled faster and much more efficiently reducing the amount of CPU used during event distribution. Responsiveness is therefor improved in all apps, especially those with 3D graphics and those that are CPU-intensive.

Event Handling
Along those same lines, apps using native code are now allowed the ability to receive and process input and sensor events right into their native code, improving both responsiveness and efficiency. All supported sensor types can now be received by apps, enabling and disabling of specific sensors is allowed, as is managing of event delivery rate and queing. Native libraries exposed by Gingerbread let apps handle the same kinds of input events as currently available through the framework.

Native Access to Activity Lifecycle, Windows Management
Native apps are now able to declare a new type of Activity class by the name of NativeActivity, its lifecycle callbacks implemented right direct into the native code. This NativeActivity and its native code run inside the system like other Activities, they running in apps system process and executing on apps main UI thread, receiving the same lifecycle callbacks as the rest of the Activities. Also Native APIs are revealed for managing windows.

Native Access to Storage, Assets
A native Asset Manager API is now accessible by apps, getting rid of the need to go through JNI for retrieving application assets. Streaming decompression is included along this path. Limit to compression no longer exists as far as how much .apk assets can be read, and apps have access to a native Storage Manager API that works directly with OBB files (although Dev tools for managing and creating OBB files wont be available until early 2011.)

Robust Native Development Environment
Android NDK (r5 or higher) gives you now a complete set of tools and toolchains and libraries for helping you develop apps inside Android 2.3.

NFC
Near Field Communication capability allows developers access to the new world. Proximity-based info and services for all, using NFC API to respond to NFC tags by touching things like posters, stickers, and other devices. Any number of actions can follow.

Access to Multiple Cameras
New Camera API makes use of as many cameras as are available on the device they’re working for, querying the platform for info on each camera, opening the camera that’s needed. Simple, necessary.

Take a look at all of our Gingerbread and Nexus S coverage today:
PlayStation Buttons Found in 2.3 SDK
Android 2.3 User Guide Available Now
Nexus S Review and Rundown by TechCrunch
Nexus S $529 unlocked confirms Best Buy
Nexus One Owners: Have You Received Gingerbread Yet? [Update: Not for a Few Weeks]
Android 2.3 SDK Officially Released
Nexus One Gingerbread OTA Update Due in a Few Weeks
Google Nexus S official
and into the future by heading over to the following tags: Android 2.3, Android Gingerbread, and Samsung Nexus S.