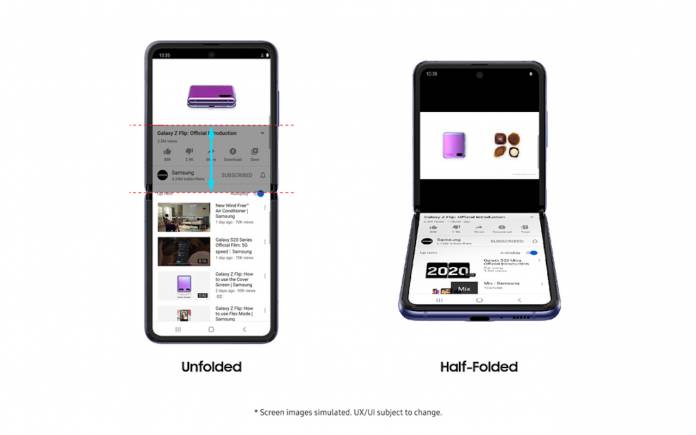 The Samsung Galaxy Z Flip is a foldable phone alright but it is different in many ways. Unlike the original Galaxy Fold, also from the South Korean tech giant, this one folds vertically. It boasts a clamshell form factor and now has a rival from Motorola–the new-gen Motorola RAZR phone. The Galaxy Z Flip isn’t exactly a bestseller but it certainly has a fanbase. We don’t have the numbers now but we believe the foldable phone has the potential to be even better.

A software update for the phone rolled out recently. It delivers new features and improvements to others. A new feature now allows a device owner to take photos or videos from lower and higher angles with efficiency.

According to a teardown video, the foldable smartphone is a challenge to open and repair. The phone isn’t that robust as shown in a durability test. That is understandable for a device with a hinge and flexible screen. We’ve got our hands-on review.

Today, the Samsung foldable phone gets another update that will improve your watching experience on YouTube. The video-sharing site and Samsung are introducing the YouTube Flex mode. This new feature is a result of Google and Samsung collaborating to improve something.

Samsung Electronics’ President and Head of Mobile Communications Business Dr. TM Roh shared: “For the past 10 years, the Samsung-Google partnership has been the driving force behind so many of this industry’s most important innovation. Now, as we start a new decade, our partnership is more important than ever, as we work together to pioneer a new generation of breakthrough mobile experiences.” The partnership brings innovation to mobile consumption.

YouTube app on the Samsung Galaxy Z Flip has been optimized. It won’t be the only one enhanced for the foldable phone but it may be the one most frequently used. With YouTube with Flex Mode, you can set the phone on a surface as if you’re watching on a laptop.

YouTube with Flex Mode splits the foldable display into two 4-inch screens. It becomes an efficient way to watch your favorite videos while hands-free. The top screen shows the video while the bottom screen shows the description, comments, and comment box.

Samsung and Google have been working closely together to improve the whole Android experience on the Galaxy Z Flip. More changes and new features are expected to be introduced soon. You can now get the YouTube with Flex mode on the Google Play Store.