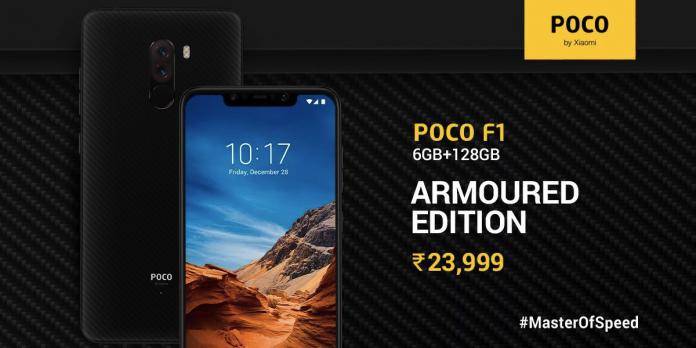 The Xiaomi Pocophone F1 is one of the most interesting mobile devices we’ve seen this year. We described this one as another gaming phone when it was first unveiled in India with premium specs and an affordable price. It’s also known as the Poco F1 and we anticipated for its global launch. A quick teardown of the smartphone made us wonder how it is affordable since the specs and features are almost high-end. It also underwent a Durability Test and we soon discovered that it is easy-to-open and “cool” but not waterproof.

The unlocked Xiaomi Pocophone F1 was made ready for pre-order in the US back in October. The device already received the Android 9 Pie-based Pixel Experience.

The Poco F1 is expected to receive the official Android 9 Pie update and even Android Q someday. MIUI 10 is also ready but only as a beta update in India.

A special edition of the Poco F1 has just been announced. Xiaomi has launched the Poco F1 Armoured Edition with 6GB of RAM and 128GB onboard storage with a low price of Rs. 23,999 which is only around $342 in the United States.

The Xiaomi Poco F1 Armoured Edition joins the Rosso Red, Steel Blue, and the Graphite Black models. One of the main differences lies in the price since the original model costs only Rs. 22,999 which is just $328.