Xiaomi is busy, busy, busy. A global launch is happening next week featuring the Xiaomi Mi A2 and Mi A2 Lite, as well as, the new Mi Max 3. We’ve been telling you several details about the phones especially the Mi Max since images and specs were leaked back in January. We noted it would arrive with wireless charging and iris recognition. After hitting TENAA and being shown off in a leaked video, we’re somewhat close to having the final list of features and specs.

It’s been over half a year now since the first related leak. Every time a new information is made public, we become confident about the details. We know it will definitely have the iris recognition for security and authentication, wireless charging for convenience, plus the large almost bezel-less 6.9-inch screen. The 18:9 aspect ratio is expected and since it is Fullscreen, expect 2160 × 1080 pixel display.

Xiaomi may be revealing the Mi Max 3, tomorrow, July 19 in China, but there’s also the July 24 event. Posted on Weibo are more images and information we’re considering as teasers. There is no information on market release but it should roll out this 3rd quarter, ready tocompetee with the Samsung Galaxy Note 9 and the next-gen iPhone–or not. 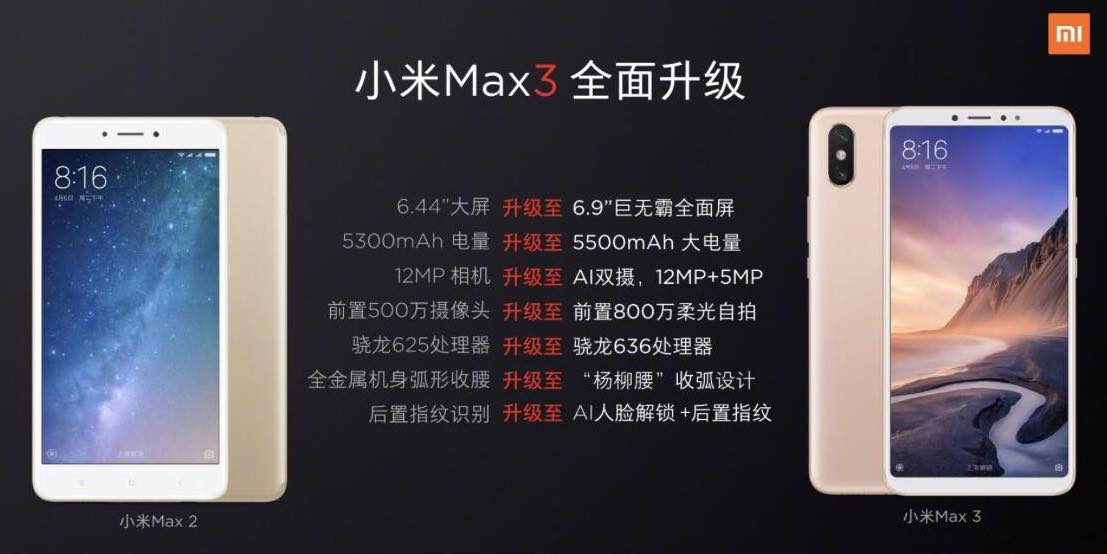 Looking at the images, we can see different color options like Gold, Blue, and Black. Other features of the Mi Max 3 will include an AI digital assistant, Bokeh effect in selfie mode, and the AI-based Face Unlock.

We don’t see any notch but the screen real estate is very large. We don’t see a capacitive button up front either. However, we highly doubt an under-display fingerprint sensor will be implemented. Xiaomi isn’t ready for that yet.

The rounded corners look familiar (like any other iPhone lookalike) and the dual rear cameras are set in a vertical orientation. We als mentioned before the Android smartphone will have a microSD card slot, 3.5mm headphone port, and an IR blaster. Out of the box, the phone will be powered by Android 8.1 Oreo OS on top of MIUI. If the specs aren’t impressive enough, wait for the Xiaomi Mi Max 3 Pro since it will have 6GB of RAM, 128GB built-in storage, and Qualcomm Snapdragon 710 processor.