As part of Apple’s patent case against Samsung in the US, it couldn’t just simply object to the Galaxy Tab 10.1. Apple had to submit alternatives for Samsung to follow which would allow it exemption from their overly vague design patents, and The Verge got their hands on some of the redacted documents. So what did Apple suggest to end Samsung’s legal trouble? Make a device that no one would want to use.

Among the requests were phones and tablets that weren’t shaped like rectangles and/or rounded on the corners, screens that aren’t centered on the front of the device, thick bezels and frames and “profiles that aren’t thin”. Yup, Apple is demanding that Samsung not make thin tablet,s an especially funny sentiment when you consider that the Galaxy Tab 10.1 is already thinner than the iPad 2.

Other suggestions include a “cluttered appearance”, non-horizontal speakers, or a complete absence of bezel. The latter is basically impossible, while the former are just ridiculous. In short, Apple wants Samsung to make and sell a phone/tablet that’s triangular, three inches thick, covered in stickers, with a huge frame and an off-center screen. That’s all. 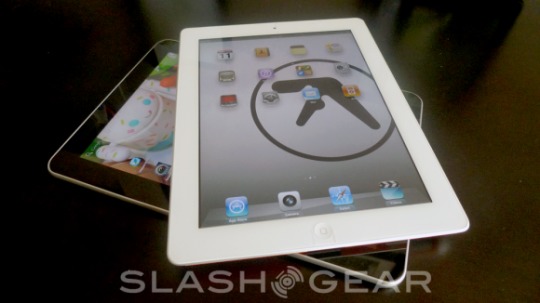 It’s pretty apparent that Apple doesn’t intend to let Samsung continue its business at all if they can help it. After the late Steve Jobs’ mouth-frothing damnation of all things Android and the company’s refusal to settle the Australian court case shows that there’s just no dealing with Cupertino when they feel they’ve been copied – an interesting state of mind, considering Apple’s design history. (Enjoy your folders and notifications, iPhone users!) Though the Australian case is looking better for Samsung after the court ruled in its favor in an appeal, Apple still has time to try and overturn the decision. Apple has already filed suit against Samsung in Germany for the Galaxy Tab 10.1N, the device that was built to placate their original patent case.

But that’s alright. The minute that Samsung releases the Galaxy Brick, I’m sure Apple will withdraw its complaints.