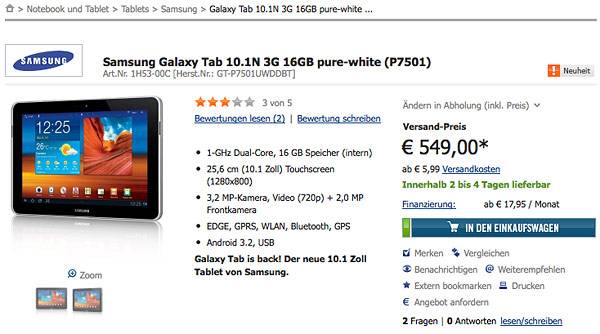 After winning an injunction against Samsung’s Galaxy Tab 10.1 in Germany over some extremely vague design patents, Apple was sitting high on the hog, keeping the South Korean company from selling tablets in the country. Months later Samsung has responded with the Galaxy Tab 10.1N, a redesigned model that presumably skirts Apple’s complaints to become legal in Deutschland. The new tablets will begin shipping in the next few days for €550, or about $743.

It’s not immediately clear what Samsung has done to the original design to make it comply with the German court’s ruling, or if Apple is planning a rebuttal on the new model. The latter wouldn’t be at all surprising, given Steve Jobs’ vitriolic mandate against Android and the company’s particular hatred for Samsung. But if the 10.1V successfully sidesteps Apple’s design patents, you can expect to see a similar model popping up in Australia soon, and perhaps even replacing the standard model worldwide to avoid future lawsuits.

That includes the United States, where Apple is currently suing Samsung over the Galaxy Tab 10.1 and other devices. Since the design looks like it’s got only a few minor changes, on the hardware side at least, it should be easy enough for Samsung to transition manufacturing for current and future models (assuming that it’s necessary). If Apple can raise any further objections, I’m sure we’ll hear about them in the coming months.