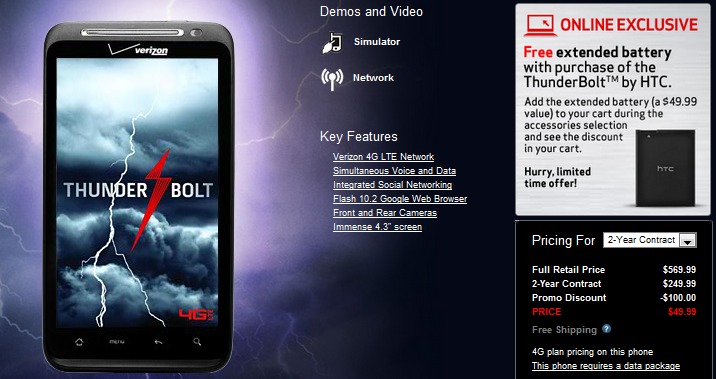 Do you not have enough lightning in your life? Is your phone’s outdated 3G connection bumming you out? Are you a Verizon customer with at least $50 in your bank account? Do you have poor impulse control? If all these things describe you, then by all means, jump on over to Verizon’s Thunderbolt page to take advantage of rock-bottom pricing on HTC’s (current) king of the 4G airwaves.

The carrier is offering the HTC Thunderbolt for just $49.99 for existing customers, provided that they’re eligible for a two-year contract renewal. Even better, Verizon is throwing in an extended battery for free and gratis – a very sweet deal if you intend to make use of that juice-hungry 4G radio. In a strange move, new customers aren’t eligible for the included $100 rebate, bringing their total cost up to $150.

So why wouldn’t you jump on this amazing opportunity? First, as Android Community readers know, there’s always something new around the corner, and that fact is likely what spurred this generosity in the first place. There’s the rumored Samsung Nexus Prime, which totally is/absolutely isn’t a Verizon exclusive. There’s the HTC Vigor, AKA the Rezound, AKA the Incredible HD, with a truly incredible 720p display. And then there’s the new Motorola event scheduled for next week, which coincidentally enough, has been announced on the same day.

All that aside, $50 for a new Thunderbolt is a pretty sweet deal. It’s hard to go wrong with HTC’s hardware, and with a vibrant developer community already pumping out ROMs for the phone, there’s plenty for modders to play with too. Head over to Verizon’s Thunderbolt page to pick one up, and remember to log in with your Verizon account to see the $49 price tag.