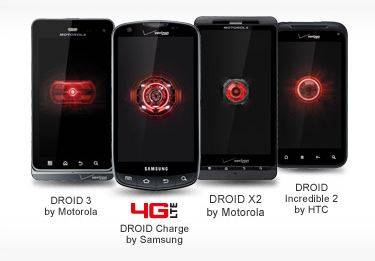 You like Android phones. (Presumably, anyway – why else would you be here?) You like saving money. If you also like Verizon and don’t mind missing out on the latest bells and whistles, you can score a pretty sweet deal on some of last year’s DROID series phones. Between now and Monday, March 12th, you can get the Motorola DROID 3, Motorola DROID X2, HTC Droid Incredible 2 or the Samsung DROID Charge for just ten bucks, with a new two-year contract. There’s also a DROID X2 phone and accessory pack with a car charger, holster and screen protector for “just” $49.99.

There’s a little something for everybody here, though with just four phones picky users will have a very narrow scope. If you want LTE, the Samsung DROID Charge is your only choice. It was Sammy’s first Verizon 4G LTE phone, and has since been overshadowed by the Galaxy Nexus. For QWERTY tappers, the DROID 3 is the only option, and if you’ve got to have a big screen in a slinky body, the DROID X2 is a good choice. But we think the best phone out of the four is the HTC DROID Incredible 2, due to its solid construction, good battery life, relatively mature Sense UI and (last but definitely not least) an unlockable bootloader. If you live in a non-LTE area (or can live without it) it’s the best pick for the modders out there.

In truth, none of them are bad choices (just remember to turn off LTE on the Charge to save battery). If you want something new for basically free, head over to the link and sign your next two years away. Notably these deals do not apply to existing customers – you have to either switch from another carrier or add a new line. What say you, Android faithful: Any takers?